Painting of the Month (5) May 2010: St Francis by Giotto di Bondone 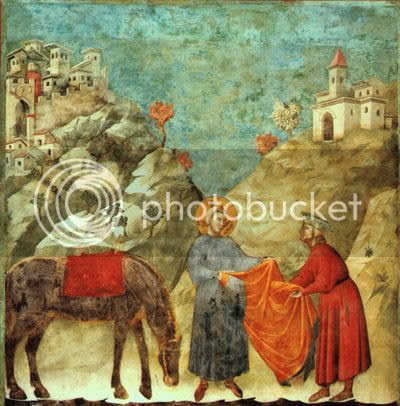 By Giotto di Bondone (c. 1267 - 1337)
Giotto has a special place in the pantheon of the history of painting. Although he displayed no real knowledge of perspective like, say, Ucello (born 1397), or a knowledge of human anatomy such as that displayed by Michaelangelo (born 1475) he is generally credited with being the first to breakaway from the dominant style of Byzantine art which displayed very little realism and appeared very flat with hardly any shading.
So, although his work appears to be very 'ancient' to our eyes, it should be viewed in the context of his being sometimes known as 'the first painter'. This was a move in the direction of realism.
Incidentally you might note the lack of blue pigment in this painting.
All the ultramarine used in Europe was imported from the mines at Badakshan, in what is now Afghanistan. Extracted from the semi-precious stone lapis lazuli, it was an extremely lightfast, bright deep blue. The extraction process was complicated and labour-intensive, which added to its cost (more than gold at the time). The pigment was imported via Venice, so it was used by a lot of Italian artists, who had relatively easy access to it.
Giotto probably didn't even have the option of using it.
In later rennaisance religious art you can see that the robes of the virgin were depicted in 'heavenly' blue, which would have been read as a sign of both opulence and reverence.

I am wondering if there's a connection between this change in art (from the flatness of Byzantine painting to Giotto's realism) and the change in music (from plainchant to polyphony.)

I don't know much about art so your post is broadening my horizons.

Bob: I did enjoy your recent 'art' postings. We can all enlighten each other!
I suppose one could say polyphony and perspective were both about adding new dimensions; it cetainly was going on at the same time.
But then, you are the music specialist.
Fascinating stuff.

I think the chap on the right in the red dress is saying:
"Go on Gov, it's the last one and I can let you have it for half-price. Never mind the quality, feel the width".
When it comes to fine art, as I told my very good friend Stephen in Autralia (An Evolution of Knowledge) you can't beat Rolf Harris. What a talent!

Sir Tom: Rolf Harris! Your sophistication knows no beginning, Sir Tom.
Why don't you start a blog putting humourus comments to famous paintings? I'll bet you could put some cheeky words in the mouth of the Mona Lisa.

What I put in the mouth of the Mona Lisa is strictly between her and I!

Dear bazza,
A most enlightening post. I always wondered what lappas lazuli was. Had heard the words but didn't know where they came from.
Also, wasn't it Giotto who painted a perfect circle freehand? or is that story apocryphal. Or do I have the wrong person altogether?
Hope you can enlighten me.
Yours with Very Best Wishes,
David.

David: Giotto was supposed to have had that ability but it's not really known for certain. Picasso is also said to have been able to draw a perfect circle freehand but descibed it as "a useless task"!

Hi bazza,
I will admit my knowledge of this particular painter in non existent.
So I very much appreciate you submitting this most interesting information about Giotto.
The next time I am at the National Art Gallery; I shall be looking at paintings from a very different outlook. Thanks, bazza.
With respect, Gary.

Gary: I am so pleased you find it interesting. I find art history spell-binding and, in this case, almost paralell to the history of science with topics like perspective and production of pigments.
And Sir Tom's humourus comments!

I've moved my paintings around in my home. I like to think 'my art's in the right place'....

Gary: Don't give up the day job, mate!