I met a traveller from an antique land
Who said: “Two vast and trunkless legs of stone
Stand in the desert. Near them on the sand,
Half sunk, a shattered visage lies, whose frown
And wrinkled lip and sneer of cold command
Tell that its sculptor well those passions read
Which yet survive, stamped on these lifeless things,
The hand that mocked them and the heart that fed.
And on the pedestal these words appear:
`My name is Ozymandias, King of Kings:
Look on my works, ye mighty, and despair!'
Nothing beside remains. Round the decay
Of that colossal wreck, boundless and bare,
The lone and level sands stretch far away”. 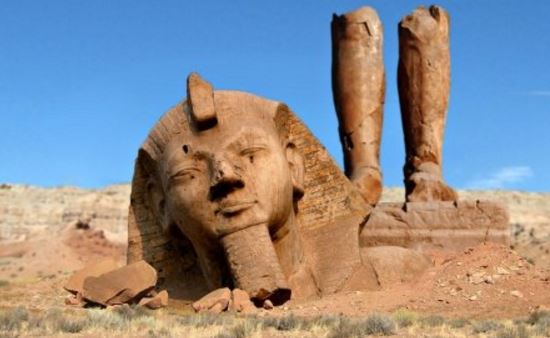 Shelley has used the exotic ancient past of Egypt to demonstrate that art can critique power and, perhaps, to make a statement about the politics of his own time. Ozymandias may have been a despotic tyrant but his Empire and his monument have been reduced to rubble – only the sneer remains and the inscription. The traveller who is relating the story looks about him after reading it but only sees the “Lone and level sands that stretch far away”. Nature is mightier than the king and all of his power and glory is reduced to dust. The vast desert is mocking human vanity and hubris. For me, this is an absolute masterpiece

Footnote: What does this poem have in common with Breaking Bad?
The final season of Breaking Bad follows Walter White as his meth-producing empire, metaphorically crumbles into the sand in the desert of New Mexico. Near the end of the consistently brilliant series one of the best episodes is called .........'Ozymandias'.

I have been listening to the brilliant but tragic Judee Sill singing The Kiss. You can hear it here. There is also a live version from the BBC which I find very emotional (but I'm a bit soppy).
Posted by bazza at Saturday, March 25, 2017 6 comments: 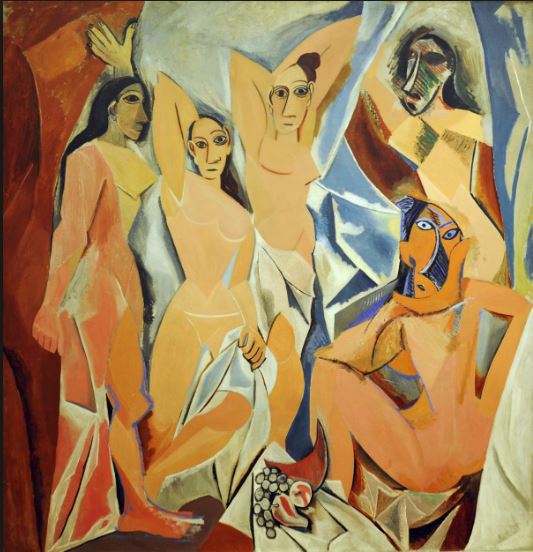 Les Demoiselles d'Avignon, Pablo Picasso, 1907
This is one of the most famous paintings ever made but, even now, a hundred years after it was first exhibited it tends to cause a strong reaction, often a negative one. I would like to try to show why it is such an important picture and to explain some of the pictorial elements and provide some contextual background. Pablo Picasso painted the picture in 1907 but did not show it until 1916, knowing the reception it was likely to receive. And the reaction was strong, even from his fellow artists. Matisse, in many ways the antithesis of Picasso and his rival to lead the avant-garde of modern painting, expressed his dislike as did Georges Braque. Braque eventually began to appreciate the work and he and Picasso went on to develop Cubism together.

Les Demoiselles d'Avignon, (The Young Ladies of Avignon), is clearly in a proto-Cubist style. It ignored the then-current style of European painting; it was very two-dimensional lacking perspective and, although clearly representative, it is beginning to break up the picture surface into lines and angles. Picasso had recently seen an exhibition of African art and owned Fang masks similar to the one shown here. The two figures on the right of the picture clearly show this influence while the three on the left have typically Iberian faces.
The picture portrays five prostitutes in a brothel on the Carrer d'Avinyó (so: young ladies of Avignon Street, Barcelona, not of Avignon in south-east France). The ladies are not demure, staring out of the picture in a slightly aggressive or confrontational manner. It was meant to shock - and it did! The work was deemed to be immoral when first exhibited in public. Picasso originally called it Le Bordel d’Avignon but it was given it's famous title by a critic who probably helped prevent total public outrage. Picasso always disliked it's newer title and always preferred his original title. He always would refer to it as "my brothel".
Every new breakaway movement in art, however radical, owes much to what went before and below I have shown some works which are acknowledged to have been influential in the creation of this work. 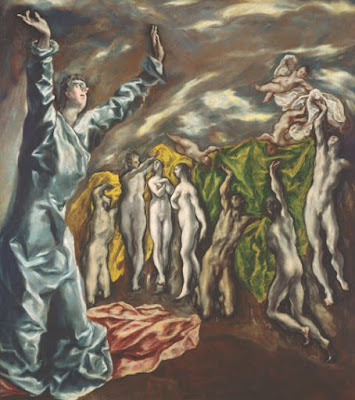 El Greco, The Vision of St John, 1608. Often cited as an influence. 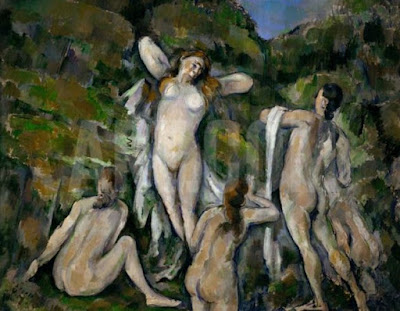