The British scientist James Lovelock is still going strong with a mind as bright as a button at the age of 92. His is a wonderful life story, of which I will relate some interesting aspects.
He was born in Letchworth Garden City in the English county of Hertfordshire in 1919 into a working class family. His father had been illiterate until an adult and had been jailed for poaching as a young man. Realising the disadvantage he was at, he took the bold step of having elocution lessons in order to advance his career.
He has been a life-long inventor and it was while working on the freezing and thawing of cell-tissues that his distress at seeing frozen rabbits thawed by a hot spoon (which burnt their fur) that he set out to thaw them with radio waves from the inside and thus invented the microwave cooker, although he was not attempting to cook the animals!
His most famous invention is probably the electron capture detector, which measures atoms and molecules in gases. This led to the first detections of CFCs in the atmosphere.
It was the news of this invention that prompted NASA to take him to the United States in 1961 when that organisation was very young. He helped design detectors that would determine the existence or not of life on the Moon and on Mars.
However, he is best known as the proponent of the Gaia Theory which claims that the Earth is a self-regulating environment wherein all of the organic and non-organic material combine to work in harmony and sustain life on our planet. This topic, which continues to divide scientific opinion, is highly controversial and Lovelock has published many books on the subject.
I don't know if it's true or not but I would like it to be! It's rare enough to find any kind of spirituality in science.
Posted by bazza at Monday, May 28, 2012 13 comments:


Q1:What did the English inventor and physician, Sir Humphry Davy, produce in 1801 about 80 years before Edison?
Q2: Which post was first held by Trygve Halvdan Lie?
Q3: Which geological feature was first described to Europeans by Father Louis Hennepin?
Q4: What, precisely, do the following books have in common?:
All My Yesterdays by Cecil Lewis
Brief Candles by Aldous Huxley
By the Pricking of My Thumbs by Agatha Christie
The Moon is Down by John Steinbeck
Something Wicked This Way Comes by Ray Bradbury
The Sound and the Fury by William Faulkner
The Way to Dusty Death by Alistair MacLean

I am off to Belgium for a few days. I will post the answers when I return at the weekend and sober up.
Have a daft guess if you don't know the answers!
Posted by bazza at Sunday, May 20, 2012 11 comments:

This is the final property in the 'Pink' set on my tour of the London Monopoly board. 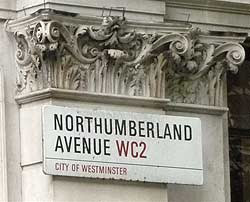 Northumberland Avenue runs from Trafalgar Square, down to the Thames embankment. It's a grand but fairly unremarkable street but does have some interesting history.

In 1605 Henry Howard, the 1st Earl of Northampton, cleared a site and built a huge mansion-house based on the medieval style with a great hall and separate apartments for various family members and attendants. His property had a garden that backed onto the river and adjoined Scotland Yard in the west; an unthinkably large land-holding by today's standards. The property was eventually sold to the Percy family, the Dukes of Northumberland, who owned it until it was acquired by the Metropolitan Board of Works in 1874 to make way for Northumberland Avenue to be built.
Edison House, Thomas Edison's British headquarters, were in Northumberland Avenue and historic phonograph recordings (which still exist) were made there including the voices of William Gladstone and PT Barnum.

Nicholas Hilliard founded the Elizabethan school of miniature portrait painting. Although, at first glance, this painting may appear unremarkable it is, in fact, extremely interesting, not least as an historical artefact. This was painted in the era of William Shakespeare's sonnet writing and the male subject is the epitome of Elizabethan romanticism; tall and handsome with dark, curly hair and an incipient moustache.
Miniature paintings were made with watercolour painted onto vellum and stretched over a piece of card about the size of a playing-card. Actually, they often were fitted onto playing-cards! The paints were often mixed in small shells and a dogs tooth fixed on the end of a small stick used to paint fine detail.
Hilliard was greatly influenced by the painting style of Hans Holbein who had died (of the plague) in 1547, and who had been court painter to Henry VIII. The style is fairly flat with strong contours and without the use of chiaroscuro, which is heavy use of light and shade. The artist reported that when he was asked to paint Elizabeth I she posed herself like this young man.
The style of the picture also tells us that the Tudor court in the 1580s was influenced by French style and was greatly francofile.
He was originally a goldsmith like his father before him and his father sent him to Geneva as a youth to protect him from persecution as they were part of the Protestant revolution that was sweeping the country at that time. In Geneva he was exposed to the French language and culture and that influence remained with him. Despite his success he always had financial problems and he was imprisoned for debt in 1617, two years before his death.
There is an extensive collection of his work in London's fabulous Victoria & Albert museum.