THIS IS A RE-POST FROM SEVEN YEARS AGO
In 1966 The Beach Boys released Pet Sounds, widely praised as one of the most influential and innovative popular recordings of all time. Meanwhile in England, The Beatles were entering the most creative period in an outstandingly productive career  They listened to Pet Sounds and were inspired in the same way that Dylan had influenced them a few years earlier. They had decided to try to produce something in a similar vain and were sensationally successful as the result was Sergeant Pepper's Lonely Hearts Club Band.
They began by each of them returning to their roots and writing a song each about their up-bringing in Liverpool. John Lennon came up with Strawberry Fields and Paul McCartney composed Penny Lane; both titles being taken from locations in that city. Their UK record label, EMI, were pushing for a new single so they released a double A-sided disc using those two songs which never made it on to Sergeant Pepper after all.
The songs are interesting because, for me, they epitomise the character and song-writing style of each of the two Beatles.
Penny Lane is strongly melodic and actually fairly complex musically. The lyrics are very interesting and must seem mysterious to non-British listeners. They contain several ambiguities
such as being "there beneath the blue suburban skies" while the fireman "rushes in from the pouring rain - very strange". Very strange indeed. So the images are being presented as a kaleidoscopic view of Liverpool. It is rumoured that McCartney was using LSD at that time....."She feels as if she's in a play. She is anyway"
"Four of fish and finger pie" is a very clever piece of writing and worth explaining. "Four of fish" referred to four pennies worth of Fish and Chips and "finger pie" is a sexual reference to the fumblings that went on the the bus shelter (solo or joint!). Also it's a lovely pun on 'fish fingers' which is how fish sticks are known in the UK.
One of the most interesting things about the recording is the piccolo trumpet solo played by  the late David Mason of the London Symphony Orchestra. Paul heard a recording of Bach's Brandenburg Concertos and asked George Martin what the instrument was playing the high notes. It is an exceedingly difficult instrument to play because it does not keep properly in tune with itself! The player has to 'pitch' the notes him or herself. Very strange. Paul told David Mason exactly which notes he wanted to be played. Paul McCartney was a great inventor of melody and an original lyricist. Listen to it HERE.
By complete contrast Strawberry Fields Forever really represents the state of John Lennon's mind at that time and I am going to talk about this song from a psychological point of view. Strawberry Field is the site of a Salvation Army Children's Home in Liverpool near where Lennon grew up. Lyrically the song is very introspective with each verse descending deeper into a kind of mire of indecision:
"No one I think is in my tree, I mean it must be high or low.That is you can't you know tune in but it's all right, that is I think it's not too bad."
and
"Always, no sometimes, think it's me, but you know I know when it's a dream.
I think I know I mean a 'Yes' but it's all wrong, that is I think I disagree."
But the most amazing thing about this record is the way that the very recording of the song reflects John Lennon's indecision. Did you know that the record is made from two completely different takes spliced together? If you listen carefully HERE at about the one minute point you can clearly hear the miraculous job that engineer Geoff Emmerick and producer George Martin have done. They had two recordings at different speeds and in different keys which they achieved by slightly slowing one down and speeding the other one up. This matched the speed and altered the pitch and it was all done with a pair of scissors and two tape machines!
Postscript: Brian Wilson of The Beach Boys was in the middle of producing their album Smile when he heard the Sergeant Pepper album being played on the radio in his car. He pulled up at the side of the road and listened to the whole of the record. He immediately stopped work on Smile and did not go back to it for decades. I wonder what he thought.
Also, years later, George Martin said that it was an awful mistake not including Strawberry Fields and Penny lane on the album because they were the foundation of the concept that generated it. However, the Beatles had a policy of not including single releases on albums.
Posted by bazza at Tuesday, April 30, 2019 8 comments:

About ten percent of all of REMBRANDT VAN RIJN’s works were self-portraits. He made around one hundred, of which about forty are paintings. His earlier efforts were mainly etchings but later on the oil-paintings took over. He produced self-portraits at a steady rate until his death in 1669 aged 63 and they form a sort of artistic autobiography and they give us an ever-changing view of his appearance – warts and all. This is my favourite of his self portraits; he generally did not paint in this rather grand way but instead showed himself in everyday poses and using a variety of facial expressions which was very unusual for that time. 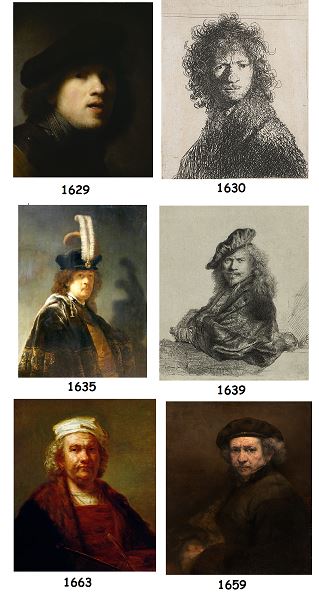 I'm listening to Elvis Costello singing the marvellous song Shipbuilding, originally written for Robert Wyatt (whose version I actually prefer). Elvis improved the original lyrics in the light of the Falklands War. It includes the wonderful lines "Diving for dear life when we could be diving for pearls" - a poignant look at the choices people make. The song tells the story of men and boys being sent to war in the very ships that they had constructed. Listen here.
Posted by bazza at Thursday, April 18, 2019 10 comments: