I have just got back from a very long weekend in France so I am a bit full of wine and croissants! Here's a post I wrote before I left.

fe
All ABOUT GRAPHENE
I have tried to eliminate or explain all the many technical terms there were in this post so that, hopefully, every reader can understand it. I have a technical background and some of it is even beyond me so, as a by-product, I am educating myself about this very import material. 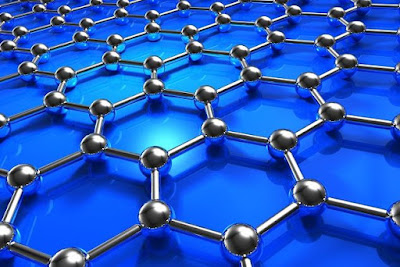 So what exactly is graphene? Well it's a sheet of hexagonal carbon molecules which is only one atom thick. It is regarded as being two-dimensional and it has many applications. It is the world's strongest known product and is the best conductor of electricity and of heat.
Graphene has often been described as the "material of the future" with some stunning ideas in development. It's thickness is around 0.345nm. A nanometer is one thousand-millionth of a metre. It is essentially made out of graphite, the same thing that the lead in pencils is made of.
Graphite it is an allotrope of the element carbon, meaning it possesses the same atoms but they’re arranged in a different way, giving the material different properties. For example, both diamond and graphite are forms of carbon, yet they have wildly different natures. Diamonds are incredibly hard, while graphite is brittle.
Five uses for graphene that are being developed.
Antibiotics: Graphene oxide, which is a form of graphene with oxygen incorporated into it, wraps itself around bacteria, puncturing it's membrane. With a burst membrane bacteria cannot survive. Surgical tools could be coated with this carbon-based compound reducing the need for antibiotics, reducing the rate of post-operative infections and speeding recovery times. Scientists have found that graphene specifically attacks bacteria cells and spares human ones although currently it's not clearly understood why. Graphene can also be used to deliver drugs to very specific cells in the body.
Camera lens: A flat optical lens just a billionth of a metre thick will enable us to see living creatures as small as a single bacterium better than ever before. These lens would have potential in nano-satellites thus drastically reducing the cost of launches into space. Ultra-thin flexible mobile phones are in development. Another potential use could be in the advancement of delivery of super-fast broadband.
Solar cells: Because graphene is so thin it allows loads of light through it which is great for applications that need transparency such as touch screens but not so good for solar cells which need to absorb as many photons as possible. In an interesting development, a team of scientists have developed a technique based on the ways moth's eyes work  which enables them to have good vision in the dark by focusing light into the centre of their eyes. This has allowed them to increase the light absorbency of graphene sheets from 2.3% to 95%.
Lubricants: Much research has been undertaken to explore the conductance of graphene but a team in Switzerland is looking at it's lubricating prowess on a nanometer scale. In future they claim, that by coating parts of machinery they will create a frictionless surface resulting in almost zero energy loss between moving parts. This would improve energy efficiency and extend the life of equipment.
Batteries: Graphene can make batteries that are light, durable and suitable for high-capacity energy storage and with shorter charging times. 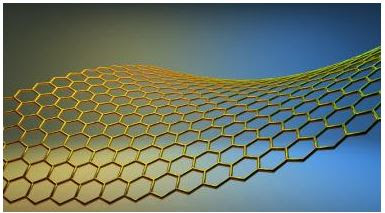 Many sporting goods, making use of graphene to enhance materials, are already in production such as: tennis rackets, skis and trainers as well as wheels, frames and safety helmets for bicycles.
But perhaps graphene's most extraordinary property is that after more than a decade of intensive investigation it continues to startle the world of science. Recently two seemingly contradictory properties were added to the list. One is that it appears to be almost twice as bulletproof as Kevlar. At the same time another piece of research showed that the impenetrable barrier was actually porous to hydrogen ions. This has implications for drawing hydrogen, a potential fuel, right out of the air! You are going to be hearing a lot more about this exciting product in the very near future.

And if all of this hasn't impressed you, well hear this
- it can be self repairing!
I'm listening to Joan Baez singing her beautiful, plaintive composition Diamonds and Rust which is about her relationship with Bob Dylan. Listen here.

A First Basket of Quotations

"It's cute how food labels think there are
eight servings in a pie!"
I do like a pithy quotations and I collect them from all sorts of sources and store them in a word document which I keep on my desktop. I run a once-a-month charity walking group and send out emails to about 150 people and, on each mailing, I use a different quotation; a few of them are my own (but I usually describe them as 'anonymous' but the ones here not mine - I think....). There many categories of  types - wisdom, humour, thought-provoking etc. Often I relate the quote to something relevant to the particular post or time of the year and so on. Sometimes I add a cartoon but, as drawing them takes so long, I don't do that too much nowadays. 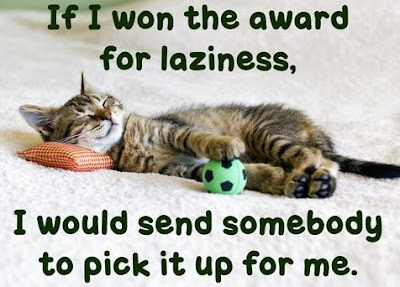 Here is a selection of some that I have used and some that I have waiting in the wings:
"I would challenge you to a battle of wits, but I see you are unarmed." - William Shakespeare, (As You Like It) (Apparently 'Good Reads' was wrong about this being by Shakespeare!)
When Winston Churchill was asked to cut Arts funding in favour of the war effort he replied “Then what are we fighting for?”
“Of course I can keep secrets. It’s the people I tell them to that can’t keep them.” - Anthony Haden-Guest
I went to a bookstore and asked the saleswoman, 'Where's the self-help section?' She said if she told me, it would defeat the purpose - Anonymous
"If Jesus was a Jew, how come he has a Mexican first name?" - Billy Connolly
"God endowed a woman with keener judgement than man" - The Talmud
“Always be sincere, even when you don’t mean it.” - Irene Peter
Never laugh at your wife's choices..... you are one of them!
“Try to be a rainbow in someone’s cloud”-Maya Angelou
“If your brains were made of gunpowder they wouldn’t blow your hat off!” – Anonymous
"My grandmother started walking five miles a day when she was sixty. She's eighty-six now and we don't know where the hell she is." Ellen Degeneres
“We hang the petty thieves and appoint the great ones to public office.” – Aesop
“I’ve written a book about DIY First Aid. It’s called ‘Suture Self’ - Anonymous
“Have you ever noticed that anybody driving slower than you is an idiot, and anyone going faster than you is a maniac?” - George Carlin
Last year I joined a group for procrastinators, We haven't met yet...- Anonymous
“If you light a lamp for someone it will also brighten your path.” - Buddhist saying.
“No one has ever become poor by giving.”-Anne Frank William Heath Robinson, 1872-1944, was a British painter, illustrator and cartoonist who achieved a level of fame in the First World War with his humorous drawings of incredibly complicated machines which were designed to perform extremely simple tasks. In the USA you may be familiar with the term Rube Goldberg machine which gives you an idea of what he was all about. These days the expression "a Heath Robinson machine" refers to something that seems to be over complicated. You may be aware of the machinery in the Wallace and Gromit animated films. That.
Putting holes into Double Gloucester cheese using the Gruyere method 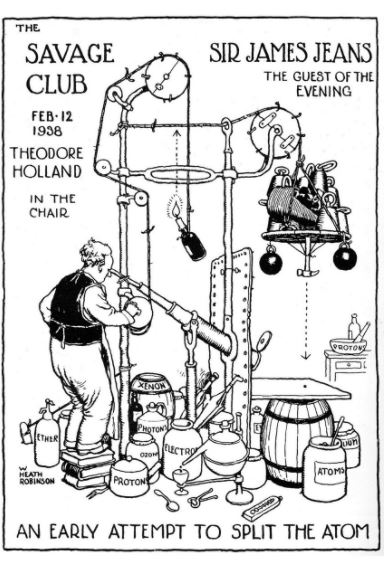 William Heath Robinson was an illustrator of books of poems by Edgar Allen Poe and Rudyard Kipling and of other children's books in an Art Nouveau style similar to that of Aubrey Beardsley. His talent as an artist is sadly overlooked due to the continuing popularity of his other work.
I couldn't argue if you said he was an illustrator rather than a fine artist but I still think he deserves to be considered for artistic skills.

Love is not all by Edna St Vincent Millay