When I first read this poem I did not fully comprehend what was going on but I knew that I really liked it. Justice was a very experimental poet but also wrote in a wide variety of forms from formal, traditional to blank verse. It is paradoxical in many ways; the first line (which is repeated as the last line) states that the poem is 'not addressed to you', when clearly it is.
How should we deal with this? What is the poet saying to the reader? 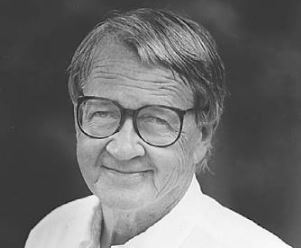 
This poem is not addressed to you.
You may come into it briefly,
But no one will find you here, no one.
You will have changed before the poem will.

Even while you sit there, unmovable,
You have begun to vanish. And it does not matter.
The poem will go on without you.
It has the spurious glamor of certain voids.

It is not sad, really, only empty.
Once perhaps it was so sad, no one knows why.
It prefers to remember nothing.
Nostalgias were peeled from it long ago.

Your type of beauty has no place here.
Night is the sky over this poem.
It is too black for stars.
And do not look for any illumination.

You neither can nor should understand what it means.
Listen, it comes without guitar,
Neither in rags nor any purple fashion.
And there is nothing in it to comfort you.

Close your eyes, yawn. It will be over soon.
You will forge the poem, but not before
It has forgotten you. And it does not matter.
It has been most beautiful in it’s erasures.

O bleached mirrors! Oceans of the drowned!
Nor is one silence equal to another.
And it does not matter what you think.
This poem is not addressed to you.

The last lines of Shakespeare's Shall I Compare Thee to a Summers Day are:
"So long as men can breathe or eyes can see,
So long lives this and this gives life to thee".
Justice makes a similar point, that the poem will not change over time ('You will have changed before the poem will') but the reader will. Poets usually form a relationship between themselves and the poem but in this case the reader is also involved, despite what the poem says.
I think he also says that the poem is not important (his poetry was often self-effacing): 'do not look for any illumination'.  If we had said to the poet "Ah gotcha! If the poem is not addressed to me, why am I mentioned?", he might have riposted something akin to the answer in Monty Python: "I might be arguing in my own time!".
It's ironic that the poem is profound while claiming not to be ('There is nothing in it to comfort you'). One cannot help being drawn into it and seeking meaning!
Listening to The Doors singing 'Touch me' (it's on the radio!)
Posted by bazza at Sunday, June 12, 2016 18 comments: Cimabue: Fresco in the Basilica di San Francesco, Assisi c.1278
The picture depicts the Madonna and Child with four Angels and St Francis
Sometimes in art, as in life in general, greatness is soon eclipsed by a still superior greatness. Cimabue (1240 - 1302) was the last great Byzantine painter but his pupil Giotto is generally regarded as the first great painter of the Italian Renaissance.  Today the name of Cenni di Pepi, known as Cimabue (pronounced as Cheema-boo-ay) is barely known while the genius of Giotto is rightly recognised. The characteristics of Byzantine painting were; an almost total concern with religious expression, mainly icons;  flatness and lack of perspective; often a severe almost abstract other-worldly style was used and background and highlights were of gold which had the ability to make a solitary figure appear to be floating somewhere between the wall and the viewer. The intention was to depict images of the divine that were raised above the mundane. Despite, or possibly because of these restrictions, the art managed to convey great beauty.
It can be seen from the detail, left, that Cimabue was beginning to get some individual expression into the faces he painted. Before his time there was no individuality shown in portraits. It's important to realise that new styles in art don't just cut in with the suddenness of a banjo chord; Cimabue was a genuine link between Byzantine and Renaissance art. Little is known about his life although a few details are given in Vasari's Lives of the Painters (1550).
I'm listening to a cast recording of the 'American Tribal Love-Rock Musical' Hair. The current track is 'What a Piece of Work is Man', lyrics by W.Shakespeare. Listen here.
Posted by bazza at Friday, June 03, 2016 14 comments: