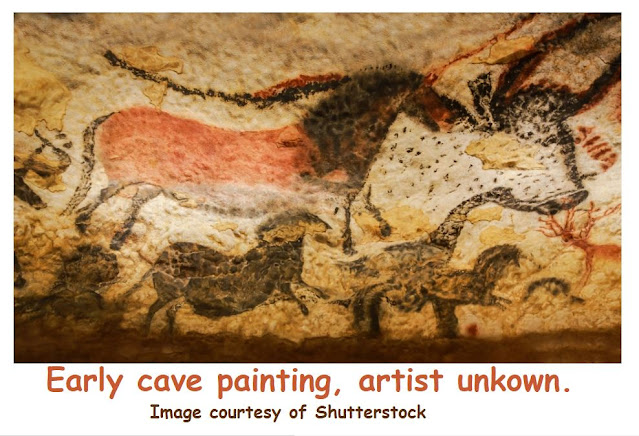 CAVE ART, generally meaning the paintings and engravings found in caves and shelters dating back to the Ice Age, roughly between 40,000 and 10,000 years ago, is generally considered to have a symbolic or religious function, sometimes both. The exact meanings of the images remain unknown, but some experts think they may have been created within the framework of shamanic beliefs and practices. A shaman would have been someone believed to have access to good and evil spirits.

Most cave art consists of paintings made with either red or black pigment made from iron oxide, manganese oxide and charcoal and about 400 are known of in several European countries and also in Indonesia. The majority of the paintings (and some sculptures) depict mostly animals and a few 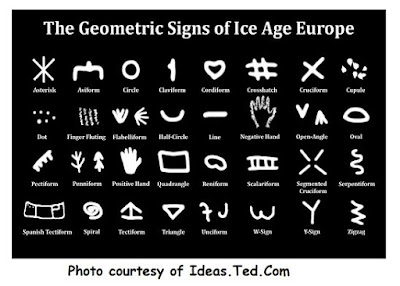 humans. Sometimes a head or genitalia are shown and also outlines of hands. Birds and fish were rarely depicted.These works were not made by ‘cavemen’ although they are usually found in caves, but by modern humans Homo sapiens, anatomically identical to us today.

Recent studies have been made of the numerous geometric signs, though the specific types vary based on the time period in which the cave was painted and the cave’s location. A remarkable realisation was that a range of 32 different signs repeated themselves over and over across the entire European continent over a period of thirty thousand years! That means that the symbols must have been meaningful to the people who were using them because of the replication. It has also been hypothesised that this use of symbols led to the creation of written languages.

These discoveries have overturned the conventional timeline of humans and art pushing back the ‘first art’ to pre-human times in Europe and suggesting there may have been a continuation that came ‘out of Africa’!

I'm listening to Van Morrison's Into the Mystic. It's a truly magical song and an ever-lasting joy! Listen here. 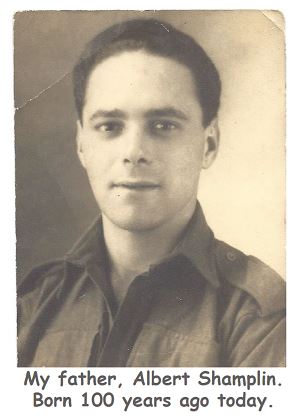 We have just celebrated the centenary of my late father, Albert. This picture was taken in Belgium during the war when he would have been about 22. On the back the picture bears a stamp that says, 'Photo Leonard, Bruxelles' with a phone number. Someone asked me if I had ever phoned that number. I said ,"What kind of idiot would ever do that?".....OK, I have.

I have a box of old photo's in which there is a letter to Dad from a lady in Belgium. I'm surprised that the letter has not spontaneously combusted! Hot....

My sister and I are convinced we have an older sibling in Belgium.

He was a very good ballroom dancer and especially liked the Latin-American stuff. I'm listening to Perry Como singing Papa Loves Mambo, one of his favourites. Listen here!