While scrolling through some of the stats for this Blog, I noticed that one of the most popular posts was one in 2010 about saucy British seaside postcards. It's a tradition that is still going strong! So I have decided, for no good reason, to show some more. To see the original post click HERE. 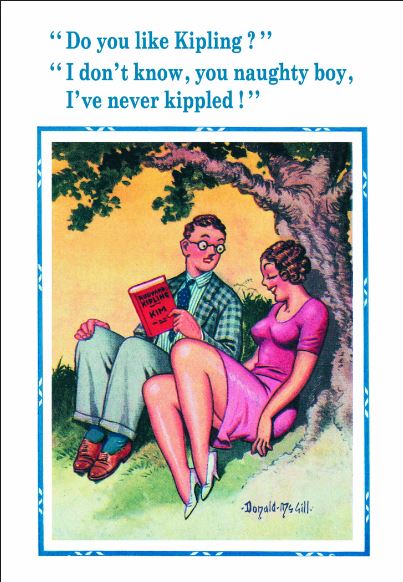 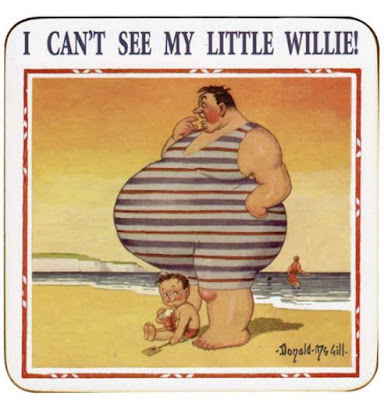 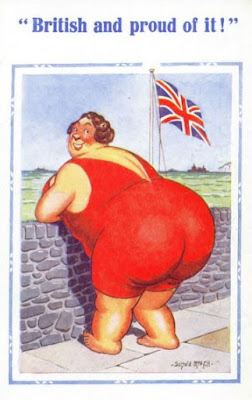 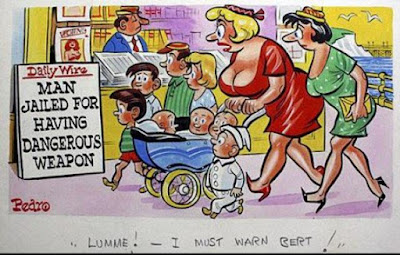 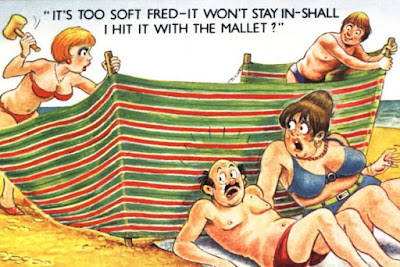 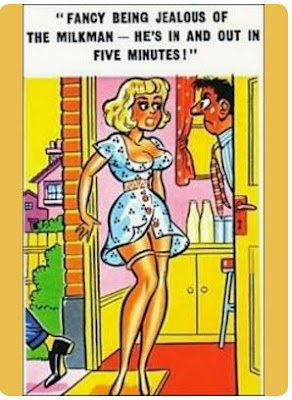 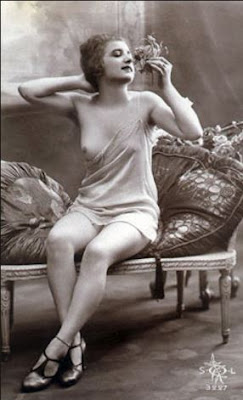 The French, of course, have a different perspective on this topic!

I'm listening to my favourite Beatles song
Strawberry Fields Forever. See if you can hear the point where two different versions of the song were brilliantly spliced together by George Martin and the studio engineers.Listen by clicking here.
Posted by bazza at Wednesday, July 26, 2017 21 comments:

Alphonse Mucha was born in Moravia (now in the Czech Republic) in 1860. He is most famous as a designer of posters, postcards and advertisements that epitomised the Art Nouveau movement. He also painted fine art pictures in a similar style.

Poster art is sometimes seen as something inferior - wrongly, in my view. Mucha created a huge number of advertising posters in a similar style to this one, which are instantly recognisable as his work. Art Nouveau, which is one of my favourite art movements, embodied the perfect meeting of art and design. In the late 1800’s art was everywhere and everywhere you looked it was Nouveau. The English Arts & Crafts movement was a major influence on the style as were the contemporary Japanese artists.

The word sonnet is derived from the Italian word “sonetto”. It means "a little song or lyric". In poetry, a sonnet has 14 fourteen lines and is written in iambic pentameter. That is to say that it has five pairs of double beats, or ten syllables, in each line. It has a specific rhyme scheme and a 'volta' or a turning point.
Generally, sonnets are divided into different groups based on the rhyme scheme they follow. The rhyme scheme in the English form is usually abab-cdcd-efef-gg and in Italian its abba-abba-cde-cde. So, you can see that the poems are generally arranged as three groups of four lines and one final pair in the English version and a group of eight lines followed by six lines in the Italian or 'Petrachan' version. 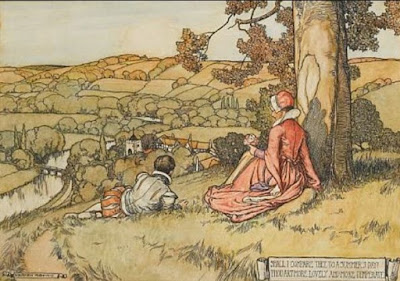 Probably the most famous English sonnet is this one:
Sonnet XVIII   by William Shakespeare
Shall I compare thee to a summer’s day?
Thou art more lovely and more temperate.
Rough winds do shake the darling buds of May,
And summer’s lease hath all too short a date.
Sometime too hot the eye of heaven shines,
And often is his gold complexion dimmed;
And every fair from fair sometime declines,
By chance, or nature’s changing course, untrimmed;
But thy eternal summer shall not fade,
Nor lose possession of that fair thou ow’st,
Nor shall death brag thou wand’rest in his shade,
When in eternal lines to Time thou grow’st.
So long as men can breathe, or eyes can see,
So long lives this, and this gives life to thee.
The 'volta' in this sonnet, as is usual in the English form, is before the final couplet of two lines. The poet uses the first 12 lines to address his lover but he finally addresses the whole readership. It's a kind of summing up of the whole thing.

Sonnet 159    by Francesco Petrarca, commonly known as Petrarch
In what bright realm, what sphere of radiant thought
Did Nature find the model whence she drew
That delicate dazzling image where we view
Here on this earth what she in heaven wrought?
What fountain-haunting nymph, what dryad, sought
In groves, such golden tresses ever threw
Upon the gust? What heart such virtues knew?—
Though her chief virtue with my death is fraught.
He looks in vain for heavenly beauty, he
Who never looked upon her perfect eyes,
The vivid blue orbs turning brilliantly –
He does not know how Love yields and denies;
He only knows, who knows how sweetly she
Can talk and laugh, the sweetness of her sighs.

In the first eight lines the poet asks a series of questions about love and in the final six lines he laments that he has not known love and, there again, the volta in the last two lines.
.
And finally a modern sonnet:
Faint Praise by Wendy Cope
Size isn’t everything. It’s what you do
That matters, darling, and you do it quite well
In some respects. Credit where credit’s due – You work, you’re literate, you rarely smell. Small men can be aggressive, people say, But you are often genial and kind, As long as you can have things all your way And I comply, and do not speak my mind. You look all right. I’ve never been disgusted By paunchiness. Who wants some skinny youth? My friends have warned me that you can’t be trusted But I protest I’ve heard you tell the truth.    Nobody’s perfect. Now and then, my pet,
You’re almost human. You could make it yet.
(from Two Cures for Love: Selected Poems 1979-2006, 2008)
And once more there is a 'killer' volta in the final couplet!
.
In my last post I featured the late Kirsty MacColl singing A New England. This time I am listening to her father, the English folk singer Ewam MacColl singing his most famous song Dirty Old Town. He was married to Peggy Seeger, half-sister of Pete Seeger.Click the title to listen (to either song!)