The Real-Life Tragedy of Peter Pan

Intriguingly, it could be said that Peter Pan and Captain Hook are buried close together at the church of St John-At-Hampstead.   Hampstead has long been a place for the rich and famous of London to live, away from the hustle and bustle. Its location is on a hill elevated above the city with natural spring waters. It is thought there has been a site of worship here since after 986AD when Hampstead was given to the monks of Westminster Abbey. The first record of a church here 1312 with a bishop by the name of John de Neuport.

In 1812, the churchyard became too full and an over-spill graveyard just the other side of the street was procured. It is in one corner of this quiet graveyard that you will find the family grave of the Llewelyn-Davies family.   Arthur (1863-1907) and Sylvia (1866-1910) Llewelyn Davies had 5 boys: George, Jack, Peter, Michael and Nicholas. George and Jack were out walking one day in 1897 with their Nanny in Kensington Gardens when they met J M Barrie, future author of Peter Pan. Barrie went on to befriend the whole family and became a big part of their lives. They went on holidays together and he supporting them financially and emotionally after Arthur’s death. After Sylvia’s death in 1910 he became the children’s guardian and was known to them as ‘Uncle Jim’. 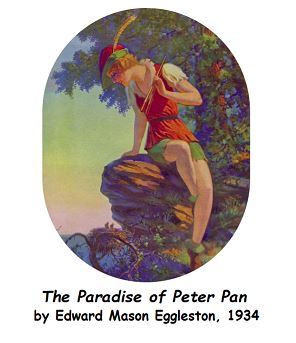 Tragically the Llewelyn children had generally unhappy and short lives. George died at the age of 21 as a soldier in the First World War and Michael drowned at the age of 20 in 1921 (thought to be a suicide). Peter also took his own life in 1960 at the age of 63 by throwing himself under a train. He was taunted at Eton for the connection with Peter Pan and believed that Barrie had exploited him. He called Peter Pan ‘that terrible masterpiece’ and it is thought that the association led him to alcoholism and depression.

Captain Hook: The story of Peter Pan was, to begin with, a play and was first performed in 1904 at the Duke of York’s theatre in the West End. The villain, Captain Hook, was played by Gerald Du Maurier. You can find him buried right by the Llewelyn-Davies family grave. But why are they buried so close? Gerald was the brother of Sylvia Llewellyn-Davies and uncle to the Llewelyn-Davies boys. Gerald’s daughter was the author, Daphne du Maurier.    Credit: LivingLondonHistory.Com

I'm listening to the fabulous Joni Mitchell singing one of her very lovely songs from the album Blue. You can listen to Carey here.