The Symbolism of Mermaids

Various myths and histories from around the world have featured mermaids and mermen for thousands of years. They were first recorded in about 1200 BC in Assyria and have featured in many ancient and modern stories since then. There were half-human sculptures of Babylonian fish-gods even hundreds of year prior to that. The ancient Assyrian goddess Atargatis was supposedly in love with a human shepherd-boy but accidentally killed him and, filled with remorse, she flung herself into the water hoping to become a fish. However, her great beauty prevented this happening but she became half goddess-half fish.
Famously, Christopher Columbus reported seeing mermaids on his transatlantic voyage; they are now thought to have been manatees which belong to group of animals known as Sirenia. 'Sirens' was the name given to the mythical creatures who lured sailors to their deaths with their songs which clearly has influenced later legends.
In 1614 Captain John Smith saw a mermaid from his ship she was 'swimming about with all possible grace'. In fact, Smith was so taken by this lovely vision that he began "to experience the first effects of love" (take that as you will) as he gazed at her before his sudden (and surely profoundly disappointing) realization that she was a fish from the waist down. This dilemma is reflected in a popular song titled "The Mermaid,"
"Cause her hair was green as seaweed


Mermaids represent many things symbolically in art: seduction, flirtation, beauty, divine feminine essence, the ocean, danger, provocation, treachery but possibly most of all unattainable love.
They have long been a popular subject in art and fiction. Hans Christian Anderson wrote The Little Mermaid in 1836 (there is a famous statue in Copenhagen harbour of the mermaid); the film Splash was a big hit in 1984. Although there is no actual real evidence of their existence, reports of sightings continue with 21st century reports from Zimbabwe and Israel. In 2009 Shlomo Cohen reported seeing a mermaid performing tricks off the coast of the town of Kiryat Yam. We have no knowledge of what kind of cigarettes Shlomo had been smoking......

Greek mythology contains stories of the god Triton, the merman messenger of the sea, and several modern religions, including Hinduism and Candomblé (an Afro-Brazilian belief), worship mermaid goddesses to this day.  Homer's Odyssey, written around 800 B.C., tells the story of Ulysses, whose ears were tortured by the sweet sounds of the sirens. In other legends, for example from Scotland and Wales, mermaids befriended and even married humans.
By the 1800s, hoaxers churned out faked mermaids by the dozen to satisfy the public's interest in the creatures. The great showman P.T. Barnum was well aware of the public's interest in mermaids and, in the 1840s, displayed the "Feejee Mermaid," which became one of his most popular attractions. People paying 50 cents hoping to see a long-limbed, fish-tailed beauty comb her hair were surely disappointed; instead, they saw a grotesque fake corpse a few feet long. It had the torso, head and limbs of a monkey and the bottom part of a fish. To modern eyes, it was an obvious fake,but it fooled and intrigued many people at the time.

Legends of mermaids may be ancient, but they are still present in many forms; their images can be found in films, books, movies and even Starbucks.
I'm listening to Nina Simone today. At this moment it's Don't You Pay Them No Mind. Listen Here. It's a great reminder of her artistry.
Posted by bazza at Tuesday, May 24, 2016 13 comments:

St James is my favourite of London's Royal Parks. It's quite small at 57 acres and forms part of a green link from Westminster in the east to Kensington Gardens in the west. King Charles II wanted to be able to walk across London from Westminster without leaving Royal greenery. It is named after James the less, one of the twelve Apostles.

London is 40% green open space - the highest for a city of it's size and the sixth highest of any city.
One of the features of St James is the exotic wildlife, with many species of water-fowl including a small group of pelicans first given by the Russian Ambassador in 1664.
"A remarkable bird is the pelican.
It's mouth can hold more than its belican."
On Sunday we saw Ruddy Shellducks, Egyptian Geese, Pochard, Red-Crested Pochard, Mute Swan, a black Swan, Mandarin Ducks, Tufted Duck, Mallard, Smew, Coots, Grey Heron and many others which I couldn't identify. At dusk one can see Pipistrelle Bats.
Although the park is very pretty and associated with Royalty it has a dubious history particularly at night-time. John Wilmot, the Second Earl of Rochester (born 1647) was considered by many to be the greatest poet of the age. The reason that you probably have not heard of him is that much of his output was eye-wateringly pornographic. His most famous poem is "A Ramble in St James Park". I'm afraid that I can't quote any here but you can look it up online (which I have done in the interests of research!) 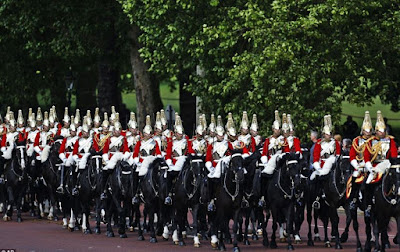 The Welsh Guard of the Household Cavalry in the park 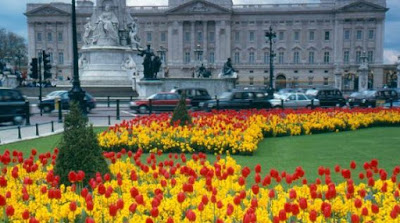 These red geraniums exactly match the colour of the Guards uniforms. 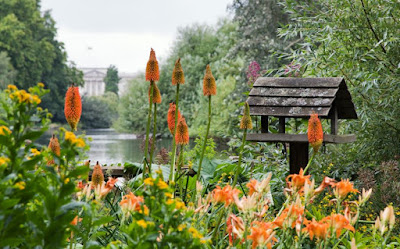 A view in the park with Buckingham Palace in the background. 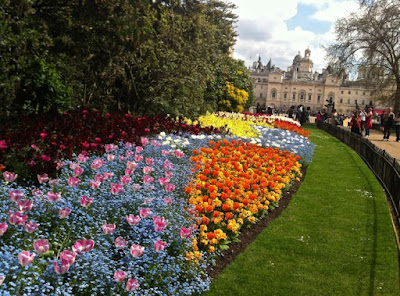 Flower beds with Horse Guards Parade in the background
Listening to Etta James version of Stormy Weather. I think her version is as good as Ella Fitzgerald's. Listen here.
Posted by bazza at Monday, May 16, 2016 8 comments: