I went recently, with my younger daughter, Laura, to hear the Liverpool poet Roger McGough reading works from his long career. In the 1960's he used to be in the band Scaffold with Paul McCartney's brother, Mike.
It was in our local library with a small audience and it was a very entertaining evening, both funny and moving by turns. I bought a few books and told him that the last one of his that I bought was as a teenager - many years ago. He looked at me over the top of his glasses with mock horror! He still has an element of that Liverpool wit, long associated with The Beatles. 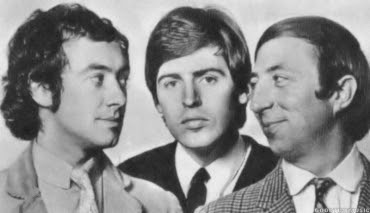 GOODBAT NIGHTMAN
God bless all policemen
and fighters of crime,
May thieves go to jail
for a very long time.
They've had a hard day
helping clean up the town,
Now they hang from the mantelpiece
both upside down.
A glass of warm blood
and then straight up the stairs,
Batman and Robin
are saying their prayers.
* * *
They've locked all the doors
and they've put out the bat,
Put on their batjamas
(They like doing that)
They've filled their batwater-bottles
made their batbeds,
With two springy battresses
for sleepy batheads.
They're closing red eyes
and they're counting black sheep,
Batman and Robin
are falling asleep.
MAFIA CATS
We're the Mafia catsBugsy, Franco and ToniWe're crazy for pizzaWith hot pepperoni
We run all the racketsFrom gambling to viceOn St Valentine's DayWe massacre mice
We always wear shadesTo show that we're meaniesBig hats and sharp suitsAnd drive Lamborghinis
We're the Mafia catsBugsy, Franco and ToniLove Sicilian wineAnd cheese macaroni
But we have a secret(And if you dare tellYou'll end up with the kitten At the bottom of the well
Or covered in concreteAnd thrown into the deepFor this is one secretYou really must keep.)
We're the Cosa NostraRun the scams and the fiddlesBut at home we areMopsy, Ginger and Tiddles

Lastly, to show that there can be depth as well as humour.....
YOU AND I
I explain quietly. Youhear me shouting. Youtry a new tack. Ifeel old wounds reopen.You see both sides. Isee your blinkers. Iam placatory. Yousense a new selfishness.I am a dove. Yourecognize the hawk. Youoffer an olive branch. Ifeel the thorns.You bleed. Isee crocodile tears. Iwithdraw. Youreel from the impact.
Continuing my new experiment of naming the music I am listening to while posting or commenting - right now it's: Dissatisfied Blues by Brownie McGhee. Listen on You Tube: https://www.youtube.com/watch?v=29i6aMOIqLQ

To celebrate my 50th Painting of the Month post I am featuring an obscure artist known as Bazza of Redbridge. He is a watercolour specialist and this is a retrospective of some earlier works including some quick holiday sketches - one of his favourite ways of working. The paintings vary in size from postcard to A4.

The Boroughs of London (3): Bexley

When I chose the London Boroughs as the topic for this series I should have thought it through a bit more. It should have been called 'A Review of Some of the More Interesting and Historical London Boroughs'. Bexley would not have been on that list! However, I have often said that, if one keeps digging, something interesting can be found about almost any topic......

The village of Bexley, after which the Borough is named, has a charter dating from 834 but hardly any other local places are mentioned in the 11th century Domesday Book. It didn't really start growing quickly until the 17th century and the development of the railways in the 19th century was a major impetus for growth. It still has a tremendous amount of green open spaces. The population now is around 237,000 blah, blah, blah.
The most important building is Hall Place, which is Grade 1 listed and a Scheduled Ancient Monument. It was formerly a private stately home but is now owned by the local authority and houses a museum and several galleries. I don't know for sure but I bet it's available for wedding receptions.