Sir Raymond Douglas Davies, Commander of the Most Excellent Order of the British Empire (CBE), better known as Ray Davies, singer and songwriter of the very successful UK band The Kinks, wrote and self-produced Waterloo Sunset in 1967. In Great Britain it is relatively rare for songs to feature geographical locations, especially when compared with the USA.
Waterloo Station is one of several major railway termini in London being named after Waterloo Bridge which was itself named after the famous British victory at the Battle of Waterloo. It is located on the south bank of the River Thames.

The wistful lyrics of the song were a Ray Davies speciality. They are a bit mysterious, describing a scene from the point of view of a person apparently content to be a 'loner'. Or is he? Are Terry and Julie figments of his imagination or is he Terry. It's a strange and intriguing mix of perspectives. Ray said in a recent interview, “Of course, everyone thought “Terry and Julie” was a reference to Terry Stamp and Julie Christie, since they were immensely famous because of Far From the Madding Crowd. But actually, the image I had in my mind was of my sister and her boyfriend walking into the future”. But this was said nearly fifty years after the record was released.
Many of Davies's song have a strong social element and he is a keen observer of his world; Sunny Afternoon, Dedicated Follower of Fashion and Well Respected Man are typical of this vein of writing.
The song is so iconic that it hasn't been covered very often. David Bowie is a notable exception but I find his version doesn't add anything new to it.
Originally the song was to be called Liverpool Sunset because Ray Davies had a strong affinity to that city bit realised he should "write what you know" and changed the title. The guitar sound as heard in the introduction was achieved by using a tape-delay device.
Listen to the song HERE

This is the first in a series of three themed posts about
Sir Winston Churchill. 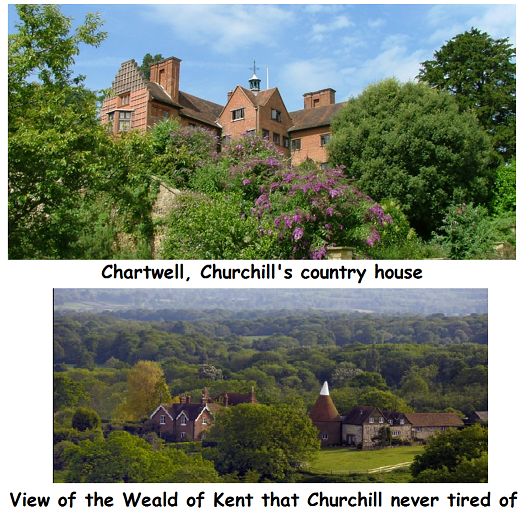 Winston Churchill purchased Chartwell near Westerham, Kent in south-east England in 1922 at a time when he was in the political wilderness and it was his primary home for forty years - almost the rest of his life. He did not live there during the war years because of it's location only twenty miles from the centre of London and it's proximity to the channel coast.
He employed the successful English 'society' architect Phliip Tilden to carry out major improvements and enlargements. The pair eventually fell out and a long-running legal dispute ensued. I think Churchill must have been a difficult client - he was a man of strong opinions knew exactly what he wanted for the property. I have seen some of the written instructions he gave Tilden and they are very specific and rather subjective.
At the time of purchase he claimed that it was the view of the Weald of Kent - a sprawling collection of rural towns and pretty villages set in pristine countryside, that he fell in love with.
The house became possibly one of the most important country houses in Europe and now has Grade I listed status. This is often awarded for historical rather than architectural reasons - definitely in this case. From there Churchill planned his campaign of opposition to Neville Chamberlain's policy of appeasement to Adolf Hitler. He had long been wary of Hitler's intentions. 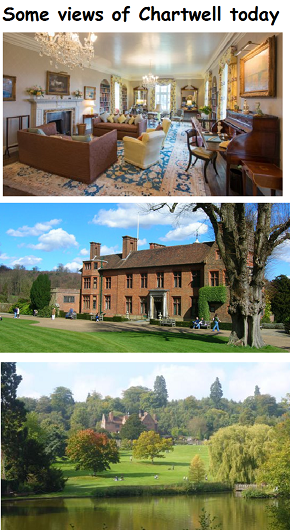 Chartwell is not an especially pretty building being in the vernacular style; that is, local materials and design were used and not necessarily built by conventionally-trained architects. I think this gives the building character. Churchill became obsessed by the property and constructed ponds gardens, brick-walls by his own hand. A heated swimming pool and two cottages were built in the grounds. He also painted many scenes of the gardens. 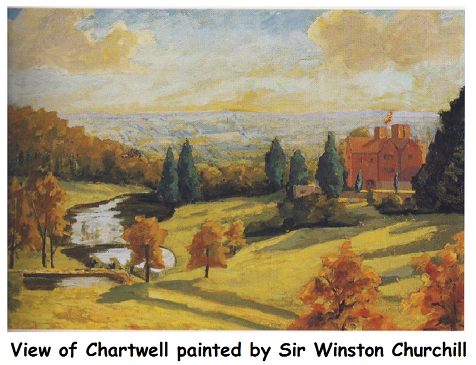 The garden wall on Mapleton road, the less attractive entrance to the property, is based on a garden wall in Quebec House, General Woolf's home in nearby Westerham town in the English county of Kent.
After the war Churchill was in critical financial circumstances and some of his friends arranged a deal with the National Trust who paid him an enormous sum for the house which he agreed to leave to the trust in return for allowing him and Lady Churchill to live there for the rest of their lives. Lady Churchill relinquished the property to the trust as soon as Winston became to ill to live there, in 1962. He died in 1965.
The property has prospered in the hands of the trust and receives over 500,000 visitors a year. 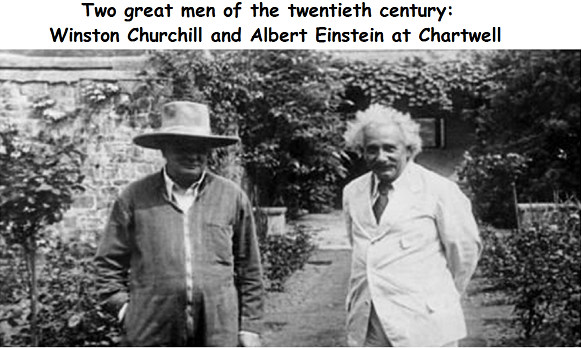 This famous painting of the Girl with a Pearl Earring  by Jan Vermeer has become so familiar as an icon of the art world that it has almost surpassed the recognition level of the Mona Lisa. Now we have another enigmatic almost-half-smile to consider. This makes this post problematic for me because I want to try to see beyond that familiarity.
Posted by bazza at Saturday, November 11, 2017 14 comments:

This article is as much about a recording as it is about a truly great popular song. I know a lot about Strawberry Fields Forever because I wrote a dissertation comparing the psychology of this song with Penny Lane as a part of my Bachelor of Arts degree and did lots of research on the subject.
First, some background details. In 1966  the Beatles manager, Brian Epstein, was pressing George Martin for a new single release. They had just begun work on a new ‘concept’ album that became Sgt. Pepper’s Lonely Hearts Club Band. The idea behind the album was initially that they would create a retrospective biographical look back to their home city of Liverpool. The first contributions were John Lennon’s Strawberry Fields and Paul McCartney’s Penny Lane. It was decided to release the songs as a double A-sided single and they never appeared on the final album. George Martin later claimed that "it was the biggest mistake of my career". Strawberry Field was a Salvation Army children’s home near to where John Lennon lived with his Auntie Mimi.
Lyrically the song is an emblem of Lennon’s indecision and uncertainty at the timer of writing it:
“Always, no sometimes, think it’s me,
But you know I know when it’s a dream.
I think er no, but I mean er yes but it’s all wrong.
That is I think I disagree.”

Further remarkable evidence of indecision is shown by a really innovative event in the recording studio. Many versions of the song were recorded over several months. After Take 7 on 29th November 1966, everyone thought that Strawberry Fields Forever was finished. Except John Lennon. After Take 26 on 21st December 1966, everyone thought that Strawberry Fields Forever was finished. Except John Lennon. John told George Martin “I like both versions. Why don’t we join them together?” However, there were two MAJOR problems; the two versions were in different keys and in very different tempos. These days that would be no problem but in the sixties the digital technology that could achieve this was decades away.
The first version was in B-flat Major at 90 beats per minute and the second, a whole tone above, in C-major and at 108 beats per minutes. In those days 'splicing' literally meant using a pair of scissors and splicing tape!  What to do?
John Lennon, never a realist and not technically minded, left the problem to George Martin and recording engineer Geoff Emerick.
I don’t believe in miracles but what happened next was, well I would say, sensational. They had variable speed tape-recorders at the Abbey Road studios and they found that by speeding-up one recording and slowing down the other one they could get an exact match. They had very fine control over the speed (and therefore the pitch) but by the most amazing luck and ingenuity they achieved Lennon’s wish. It turned out that the differences in pitch were exactly compensated for by slowing one and speeding up the other.
When you listen to the recording (click here) you can hear the change, just about, after 59 seconds. Listening to the drumbeat is the easiest way to pick it out. The purpose of an edit, of course, is that it shouldn't be heard and a marvellous job had been done.
A by-product of this work was that it gave Lennon’s voice a smokey, other-worldly sound which really suits the song. It also left the recording in an in-between pitch not exactly in any recognised key. Although Lennon had composed it in C using a guitar the published version is written as being in B-flat. The song has an unusual structure in that it starts with a chorus followed by alternate verses and choruses and ending with a chorus which gives it a musically palindromic structure. The introduction is played on a Mellotron, a keyboard instrument that used electronic recording tape so that many different sounds could be used by pre-recording them. Some sources claimed that it was played by Lennon and others by McCartney.

FOOTNOTE: It turned out that Strawberry Field wasn't forever. The Salvation Army closed the children's home in 2005 and it was demolished in 2007. Lennon Hall now stands in it's place.
Posted by bazza at Sunday, November 05, 2017 14 comments: