Piet Mondrian, 1872-1944, was a Dutch painter born as Pieter Cornelis Mondriaan, He worked in Paris and was heavily influenced by the work of Picasso and Braque who were developing cubism. Mondrian's early work shows influences of impressionism, post-impressionism and pointillism. The first picture below shows strong influences of Paul Cezanne; although clearly three dimensional the picture surface is beginning to break into two-dimensional shapes. There are recognisable objects such as books, glasses and some cheeses in a cloth. The top right of the painting clearly suggests some depth of field. 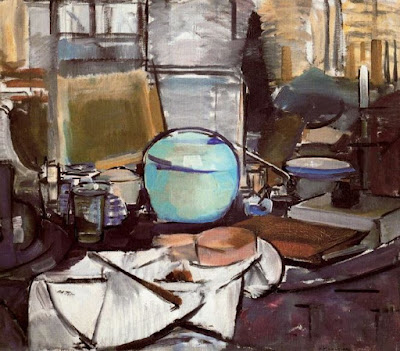 Piet Mondrian, Still Life with Gingerpot I, 1911
However, in the second slightly later picture analytical cubism has begun to be seen. That is the early stage of cubism as distinct from the later synthetic cubism which was where Picasso and Braque had begun to make collages from newspaper and other items applied to the picture surface. In the second picture, books and glasses can just about be made out but the painting is virtually two-dimensional (of course, the painting is two-dimensional but the point is that no attempt to create any depth is made). The surface, apart from the Gingerpot itself, is really just a series of shapes. The range of colours is very limited and the style is geometric. 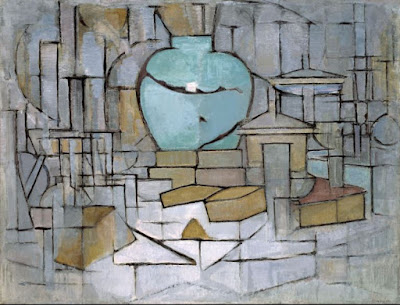 I think it has been four years since I was moved to post anything in this series but Brilliant Maps is such an interesting website that I decided to make this post. Thanks are due to my friend Curtis Gallant who has a Cambridge Degree in the History of Cartography, for directing me to this site. 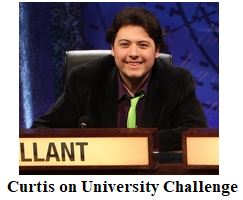 From the Whicker's World Foundation website:
"Curtis Gallant is a Cambridge classics graduate who has a specialist interest in the history of cartography. As a lover of documentaries, particularly those shedding light on cultures around the world, he was very keen to work for the Whicker’s World Foundation as Jane Ray’s researcher. It’s rumoured that the Whicker’s World Foundation decided to employ Curtis as their researcher having seen him correcting Jeremy Paxman on University Challenge on a question about African coastlines."
Brilliant Maps beautifully illustrates what the function of a map can be. Of course, primarily they tell us where things are especially in relation to each other. But they can also tell us lot about history, geography, travel, politics, populations and humour (eg, see European Food According to Italians). 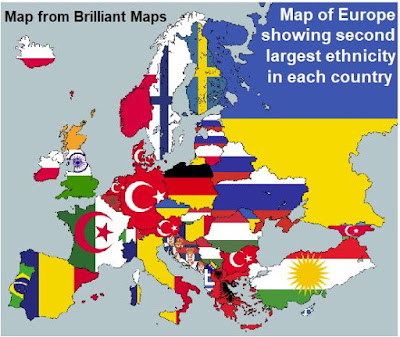 Here is a selection of some their interesting maps. Clink on the links to see the page:

1. Percentage of Young Adults In Europe, aged 25-34, Who Still Live With Their Parents

3. The Genetic Map Of Europe

4. European Food According to Italians

Take a look at their site for yourself!

I'm listening to Tom Rush's original 1968 version of his song No Regrets which later became a big hit in the UK for the Walker Brothers. Listen here
Posted by bazza at Saturday, September 16, 2017 10 comments:

“Chigwell, my dear fellow, is the greatest place in the world.....”  Charles Dickens, in a letter to a friend in 1841.
Chigwell is right on the edge of the Green Belt on London's north-west boundary with the county of Essex and had been around for a long time. It was recorded in the Domesday Book of 1080AD and the Romans were known to have been in Chigwell from 300AD. From further back in time Iron Age flints and a bronze axe have been found. The British Iron Age is usually dated as from around 800BC until the Romans came in 43AD.
(If you happen to be unfamiliar with the term 'Green Belt', it is defined as a ring around a city on which new building is generally prohibited. In London this has the affect of inflating property prices within it while preserving the pleasant countryside around it.)
There are at least two theories as to the origin of the name Chigwell. One is that it is from Chicca's Well, referring to an Anglo-Saxon chief, Chicca meaning King. There are many natural wells in the area so another theory claims the name simply refers to that fact.
A thousand years after the Romans were there, in 1391, there were just 72 dwellings in the area.

Chuck Berry (1926 - 2017) wrote Roll Over Beethoven in 1956 and it became one of the definitive songs of rock 'n roll and one of the most recorded songs of all time. Cover versions include those by Cliff Richard, ELO, Jerry Lee Lewis, Chas & Dave, Status Quo and most famously, The Beatles.
The song contain many references. The title itself points us to the fact that a new brand of music is going to unceremoniously replace the old classics. Beethoven is prompted to roll over in his grave and "tell Tchaikovsky the news"! There is a story that his sister played classical piano and he wanted to use the family piano to play rock and roll which is how the song was born.
Several contemporary song titles are incorporated into Chuck Berry's always poetic lyrics; Early in the Morning is a title from both Louis Jordan and Buddy Holly, Blue Suede Shoes was a classic written by Carl Perkins and also a hit for Elvis Presley. The familiar guitar intro to Roll Over Beethoven, which became a Berry trademark, is in fact lifted from Louis Jordan's 1946 song Ain't That Just Like a Woman. Berry never made a secret of that.
Arthur Alexander lifted the title of A Shot of Rhythm and Blues from this song although it's not really a rhythm and blues song.
The title of the nursery rhyme Hey Diddle Diddle (The Cat and the Fiddle) is a reference to Bo Diddley, who was actually an accomplished violin player.
The original musicians on the Chess Records session when the song was recorded were:
Chuck Berry, guitar and vocals
Willie Dixon, bass guitar
Johnnie Johnson, piano
Fred Below, drums
All of them were top musicians in their own right. Johnnie Johnson played with Berry on very many of his famous recordings and Willie Dixon was a famous blues singer and songwriter.
Chuck Berry was always took care to write intelligible lyrics and to make sure they could be heard properly. He wanted to avoid the fate of Little Richard's records which were covered in sanitised versions and provided bigger hits for Pat Boone.
Roll Over Beethoven lyrics:

Well I'm-a write a little letter,
Gonna mail it to my local DJ
It's a jumpin’ little record
I want my jockey to play
Roll Over Beethoven, I gotta hear it again today

You know, my temperature's risin'
And the jukebox blowin’ a fuse
My heart's beatin' rhythm
And my soul keeps a-singin' the blues
Roll Over Beethoven and tell Tchaikovsky the news

I got the rockin' pneumonia,
I need a shot of rhythm and blues
I caught the rollin' arthritis
Sittin' down at a rhythm review
Roll Over Beethoven, they’re rockin' in two by two

Well, if you feel it an’ like it
Go get your lover, then reel and rock it
Roll it over and move on up just
A trifle further and reel and rock with one another


Roll Over Beethoven and dig these rhythm and blues

Well, early in the mornin' I'm a-givin' you my warnin'
Don't you step on my blue suede shoes
Hey diddle diddle, I am playin' my fiddle,
Ain't got nothin' to lose
Roll Over Beethoven, tell Tchaikovsky the news

You know she wiggles like a glow worm,
Dance like a spinnin' top
She got a crazy partner,
You oughta see 'em reel and rock
Long as she got a dime the music won’t never stop