This pair of beautiful Georgian doors is at 42 and 43 Parliament Street in Kilkenny, Ireland. They have individual rather than shared door casements but they do share three steps leading up to them. The Gibbsian (after James Gibbs, a Scottish architect largely responsible for the 'look' of Georgian architecture) surrounds are characteristic and the fanlights above the doors are original. However, the brightly painted doors are typical in Ireland but would be unusual in England where they are more likely to be the original black or white.
I have featured them purely for their classic splendour and I love their looks!
Posted by bazza at Wednesday, February 29, 2012 18 comments:

Pentonville Road is number six in my series working around the 'London' version of the monopoly board.
Pentonville is a small local area of north London. The name is most famous for it's prison which is actually in Caledonian Road, a little to the north in Barnsbury. Pentonville Road links Euston to The Angel at Upper Street.
It is named after Henry Penton who developed many local streets in the eighteenth century when it was largely open countryside. Since 1965 it has been part of the London Borough of Islington.
The philosopher, John Stuart Mill was born there in 1806 and in Dickens's Oliver Twist the kindly old book-seller lived there. (But in the film Oliver they moved him to the more fashionable Bloomsbury. Pentonville Road is only in the 'Blue' set in Monopoly.)
Apparently Lenin lived there in 1902 and that's where he first met Trotsky.
The photograph above shows 210 Pentonville Road, a new building that recycled much of the material from the former property, known as Webb House, on the site and is entirely lit by roof-mounted solar panels.
In the distance, looking towards Euston Road, you can see King's Cross Railway Station.

(2) In the Elizabeth Taylor film Butterfield Eight, to what does the title refer?

(3) Of which great novel is this a brief summary of the plot?:
A poorly-trained American soldier is captured and held prisoner, after the Battle of the Bulge, in an underground location in Dresden Germany. He and his guards thus survive the British fire-bombing and destruction of Dresden.
As a consequence  our hero becomes "unstuck in time" and begins to experience events out of their time-sequence.
The title of the book is derived from the place he is held prisoner in Dresden.


(4) Of which excellent film is this a brief summary of the plot:
A former child-prodigy classical pianist works on an oil-field and spends most of his time in bowling-alleys and drinking beer. When he goes to see his dying father he reluctantly takes his dim-witted waitress girlfriend (played by the excellent Karen Black) along and they get into a row when a waitress refuses to take his special order and they get thrown out.
Eventually, when his girl-friend goes in somewhere to get coffee, he abandons her and hitches a ride off into the distance.

Answers are now in the comments section!!

Jan van Eyck painting this fascinating picture in 1434. It hangs in the National Gallery in London.
It has been the subject of much speculation and scholarly debate. The bride, you may notice, appears to be 'with child'. This has led to conjecture that it is not a wedding portrait. The couple are wearing expensive furs; sable for him and ermine for her. His hand is raised as if taking an oath. The small dog is a symbol of fidelity in art.
The painting is very unusual for it's time for various reasons. The image of daylight on the subjects is very 'modern' and very unusually the artist has shown a clever reflection in the convex mirror on the back wall (detail below). In this reflection one can observe the backs of the subjects and the artist at work! 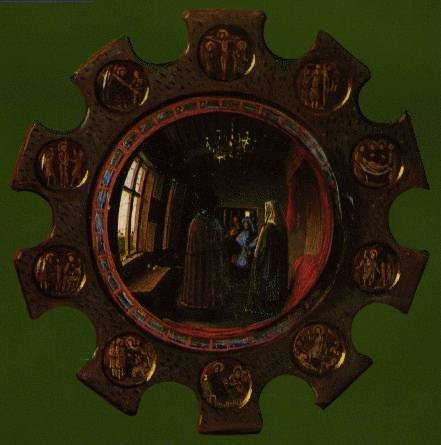 Finally, here is another more modern version of the picture which demonstrates it's place as an icon in the modern world: 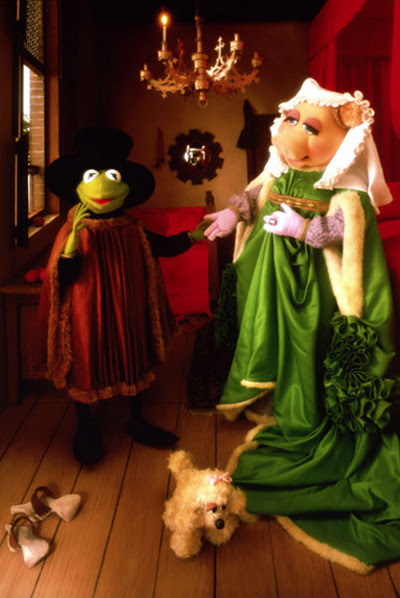 For no special reason (other than 'It's Good To Share') here is a further selection of some of my favourite music. All of the links take you to You Tube:
(1)Joanne. Michael Nesmith & The First National Band (1970). After The Monkees, Nesmith returned to his original folk-rock style and this was a minor hit although he continued to make much more good music, including 'Different Drum'.

(2)Come a Long Way. Michelle Shocked (1992). A much under-rated artist in my opinion. This is from her critically-lauded album 'Arkansas Traveller'.

(3)Blame It On the Night. Kevin Coyne (1974). A virtually unknown (and unstable) British genius who sadly died in 2004.
(4)Valse Creolo. John Williams. Also known as 'Natalia' this is one the most enduring compositions of the late Venezualan composer-guitarist, Antonio Lauro. I am very familiar with the classical guitar repertory and this much-recorded work is one of my very favourite pieces of music. It matches any mood; romantic, heart-breakingly sad, wistful and more.