Here's another repost from October 2006:

Annie Proulx (pronounced 'Proo') is a writer of wonderful fiction. Her densely written, observational style is packed with lots of detail and a very strong sense of place, such as the unfashionable parts of Newfoundland, Wyoming and Texas. Her descriptive writing always reminds me of John Steinbeck's work due to her obvious affection for the places and kinds of people who are not usually the heroes of modern fiction. She has a Dickensian knack of naming her characters in an outlandish way that very soon seems to be perfectly na 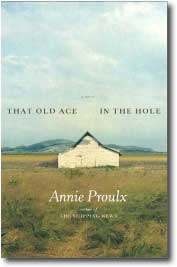 tural.
For example “That Old Ace in The Hole” (2002) features, among others, Jerky Baum, Pecan Flagg, Blowy Cluck, Coolbroth Fronk, and Waldo Beautyrooms. It’s the story of Bob Dollar, hired by Global Pork Rind to buy up small farms, in the Texas panhandle town of Woolybucket, so that they can be turned into hog farms under the guise of buying land for luxury housing. The book touches on the larger issue of pollution and depletion of the water table as a background. The story is fairly thin on plot but rich in character and anecdote.
“Accordion Crimes” (1996) lovingly tells the story of a succession of owners of an accordion. Annie Proulx is a dispassionate observer of life but she does not shy away from unpleasant scenes and can be brutally honest in her depiction of those who are the losers in life’s lottery.
“The Shipping News” (1993) is a magnificent novel that demands a lot from the reader, whose attentiveness will be richly rewarded. At the start of each chapter a picture of a different type of knot is shown and this turns out to have a metaphorical reference to the content of that chapter. It was turned into a s

uccessful movie with Kevin Spacey in 2001. In a similar way “Postcards”(1992) showed a drawing of a postcard at the start of each chapter with a message that was sometimes directly relevant to the story and sometimes just added background colour. In 1997 she wrote a short story which was published in a collection of her work called "Close Range: Wyoming Stories" (1999) which was filmed in 2005. That was the very successful "Brokeback Mountain", in which she typically tackled a subject that had hitherto been taboo in mainstream literature.
October 2013 update: As far as I can determine she has only published 'Fine Just The Way It Is' (2008) since my original post.
Posted by bazza at Friday, October 18, 2013 14 comments:

As I have not posted for a while due to time restraint I have decided to work my way back to Blogging by reposting some of my favourite previous posts. This one is from my former Blog in 2006. 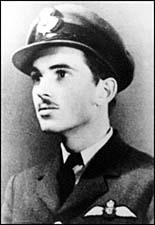 John Magee was born in Shanghai, China where his English mother and American father were missionaries. He was educated in England, became a US citizen and learned to fly in Ontario, Canada. He joined the Royal Canadian Air Force and was sent to England before the USA had entered the war. He became a Spitfire pilot and his love of flying is abundantly obvious in this poem which makes me feel as though I were flying when I read it. It was written on the 3rd of September 1941.
High Flight by John Gillespie Magee Jr.
Oh! I have slipped the surly bonds of earth,
And danced the skies on laughter-silvered wings;
Sunward I've climbed, and joined the tumbling mirth
Of sun-split clouds, --and done a hundred things
You have not dreamed of --Wheeled and soared and swung
High in the sunlit silence. Hov'ring there
I've chased the shouting wind along, and flung
My eager craft through footless halls of air...
Up, up the long, delirious, burning blue
I've topped the wind-swept heights with easy grace
Where never lark or even eagle flew --
And, while with silent lifting mind I've trod
The high untrespassed sanctity of space,
Put out my hand, and touched the face of God.
The poem is allegedly derivative of several earlier works by other writers but nevertheless stands up as a masterpiece of a description of flying. Three months after writing this poem, in December 1941, he was killed in his Supermarine Spitfire in an accident over Lincolnshire, England. Incredibly, he was nineteen years old.
Posted by bazza at Saturday, October 12, 2013 9 comments: