"The Dutchman" by Steve Goodman

The Dutchman is lovely song made (a bit) famous by the Chicago-born singer-songwriter Steve Goodman. He didn't write this particular song but his version is by far the best one.
I recommend listening here and coming back to read about it!
The lyrics are printed below if you want to follow along.

THE DUTCHMAN by Michael Peter Smith
The Dutchman's not the kind of man
Who keeps his thumb jammed in the dam
That holds his dreams in,
But that's a secret that only Margaret knows.
When Amsterdam is golden in the summer,
Margaret brings him breakfast,
She believes him.
He thinks the tulips bloom beneath the snow.
He's mad as he can be, but Margaret only sees that sometimes,
Sometimes she sees her unborn children in his eyes.

Let us go to the banks of the ocean
Where the walls rise above the Zuider Zee.
Long ago, I used to be a young man
And dear Margaret remembers that for me.
The Dutchman still wears wooden shoes,
His cap and coat are patched with the love
That Margaret sewed there.
Sometimes he thinks he's still in Rotterdam.
And he watches the tug-boats down canals
An' calls out to them when he thinks he knows the Captain.
Till Margaret comes
To take him home again
Through unforgiving streets that trip him, though she holds his arm,
Sometimes he thinks he's alone and he calls her name.

Let us go to the banks of the ocean
Where the walls rise above the Zuider Zee.
Long ago, I used to be a young man
And dear Margaret remembers that for me.

The winters whirl the windmills 'round
She winds his muffler tighter
And they sit in the kitchen.
Some tea with whiskey keeps away the dew.
And he sees her for a moment, calls her name,
She makes the bed up singing some old love song,
A song Margaret learned
When it was very new.
He hums a line or two, they sing together in the dark.
The Dutchman falls asleep and Margaret blows the candle out.

Let us go to the banks of the ocean
Where the walls rise above the Zuider Zee.
Long ago, I used to be a young man
And dear Margaret remembers that for me.

It's a sad story about growing old, dementia and long-lasting love. But, it's not entirely sad, having some wistful elements of nostalgia. I like the lines:
"And he sees her for a moment, calls her name,

She makes the bed up singing some old love song".
Such a clear picture is painted in those two lines.
Steve Goodman died of Leukaemia in 1984 aged just 36. He had known his illness was terminal for some time but kept on working and writing. His most famous song is The City of New Orleans made famous by Arlo Guthrie. 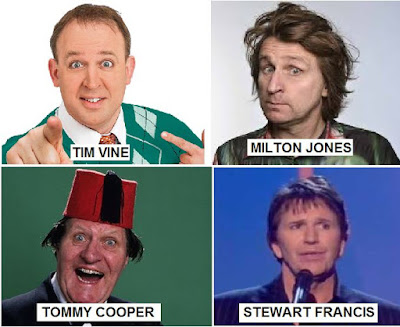 I love one-liner jokes so I've collected a few favourites together to help lighten your mood!
From Tim Vine:
From Milton Jones:
From Tommy Cooper:


And a final thought: It was hard to believe that my dad was a building site thief, but when I got home all the signs were there.
Posted by bazza at Saturday, September 17, 2016 10 comments:

View across Parliament Square with Westminster Abbey on the right.
Watercolour by Pete Scully, petescully.com
Tower Bridge and The Elizabeth Tower, which houses Big Ben are the two most iconic images of London. Big Ben is the name of the bell, not the building. It has a crack which has been there since it was cast and gives it the distinctive sound which is heard all over the world with the BBC time signal. The UK Houses of Parliament are still sometimes referred to as The Palace of Westminster because since the early eleventh century various royal palaces have stood on the site.
William I had a castle there after the eleventh century Norman invasion.
Westminster Abbey: In the early eighth century a Saxon Church dedicated to St Peter was constructed on the site. The church became known as the West Minster ('west monastery'), while St Paul's, a few miles to the east was known as the East Minster ('east monastery').

The modern square was laid out in 1868 by Sir Charles Barry and is famous as the site of London’s first traffic lights.  It is home to 11 statues of British, Commonwealth, and foreign statesmen. In anti-clockwise order starting with Churchill: This 12-foot bronze by Ivor Roberts-Jones shows him wearing a Navy overcoat. HIs 88-year-old widow Lady Clementine unveiled it in 1973, with the help of the Queen. Churchill chose the location himself in 1950. A mild electric current stops pigeons perching and snow forming on Churchill’s bald head!
Jan Smuts also has a statute, by Jacob Epstein, in the square. Smuts was the South African leader who fought the British in the Boer War but he was on Britain's side as a staunch ally in both World wars and is the only person whose signature is on the German surrender documents at the end of both wars. The other statues are of various British and foreign statesmen; Abraham Lincoln, Mahatma Gandhi and Nelson Mandela are all represented.
However, my favourite statues are both just off the square in Victoria Tower Gardens. Firstly is the suffragette, Emeline Pankhurst, the only female in sight!
Her statue was erected in 1930 just two years after her death, which is very quick by any standards. Her right hand seems to be indicated the way to the Parliament building at her side.
The second statue is a cast of Rodin's Burghers of Calais. This one was cast in 1908. The French Government strictly limits the number of casts that can be made of any of Rodin works. This one is the third. The maximum allowed would be 12.