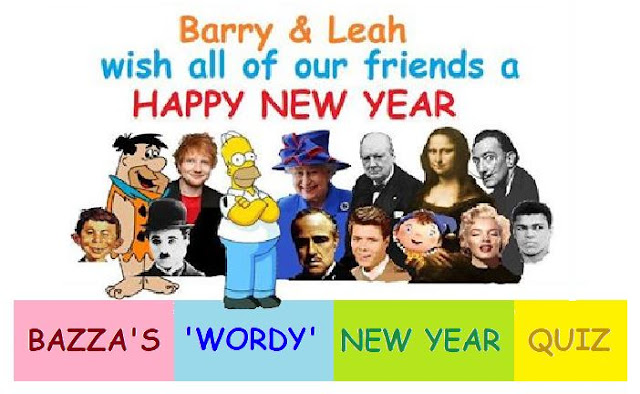 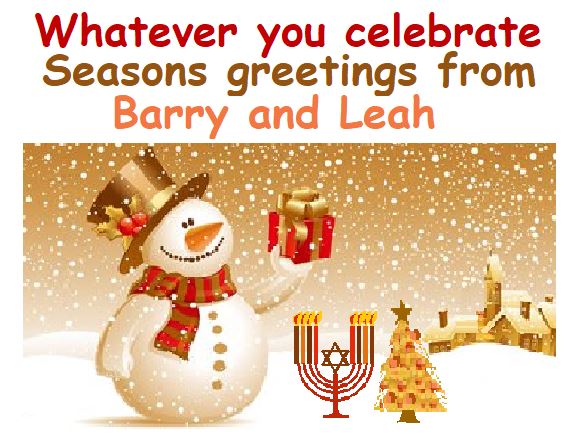 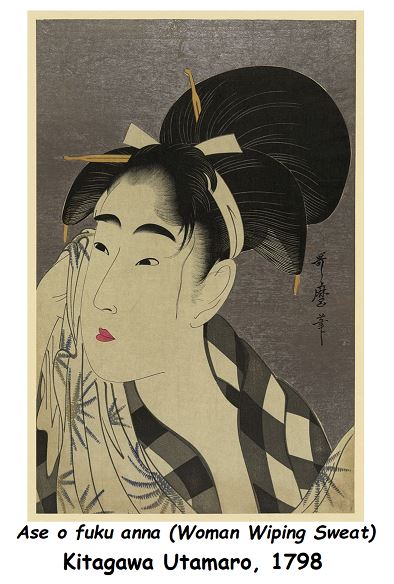 Utamaro, born in 1753, is regarded as one of the finest Japanese artists working in the medium of woodblock prints and paintings. His speciality, for which he is best known, was the series of "large-headed woman" in the 1790s.

"He created an absolutely new type of female beauty. At first he was content to draw the head in normal proportions and quite definitely round in shape; only the neck on which this head was posed was already notably slender ... Towards the middle of the tenth decade these exaggerated proportions of the body had reached such an extreme that the heads were twice as long as they were broad, set upon slim long necks, which in turn swayed upon very slim shoulders; the upper coiffure bulged out to such a degree that it almost surpassed the head itself in extent; the eyes were indicated by short slits, and were separated by an inordinately long nose from an infinitesimally small mouth; the soft robes hung loosely about figures of an almost unearthly thinness" (From Wikipedia). Here are some more of his pictures: 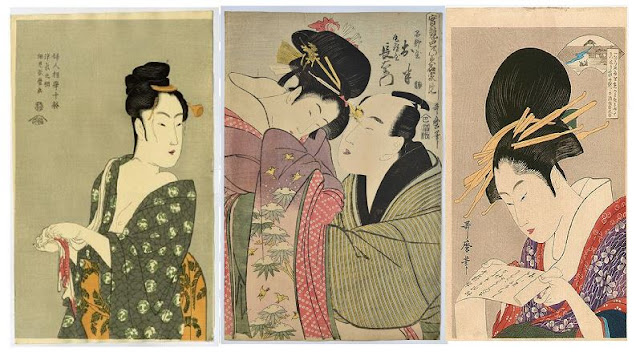 I'm listening to Joan Baez's version of Janis (At Seventeen) Ian's  plaintive and sad song Jessie. Hear it here.
Janis's own original version is almost too sad. She gives a vulnerable and completely believable performance here.

When You Are Old by W B Yeats

When You Are Old by William Butler Yeats

When you are old and grey and full of sleep,
And nodding by the fire, take down this book,
And slowly read, and dream of the soft look
Your eyes had once, and of their shadows deep;

How many loved your moments of glad grace,
And loved your beauty with love false or true,
But one man loved the pilgrim soul in you,
And loved the sorrows of your changing face;

And bending down beside the glowing bars,
Murmur, a little sadly, how Love fled
And paced upon the mountains overhead
And hid his face amid a crowd of stars.

This lovely, simple poem can be enjoyed without analysis. Its merits are not buried deeply or hidden from the reader but, being me, I am going to offer some analysis anyway.

The themes of the poem, I would suggest, are growing old, the passing of time and, slightly less obviously, unrequited love.

The speaker of the poem, whose voice we hear, is directly addressing the lady he loves and asking her to think of a future when she has lost her looks and is “old and grey and full of sleep”. The third line of the second stanza tells us that “one man loved the pilgrim soul in you”. We learn in the third and final stanza where the personification of Love has “fled” – that he has been rejected.

The poet has used some symbolism (where the words don’t have their literal meaning but stand for something else). For example when Yeats writes “take down this book and dream” book  is a symbol for reading someone’s face. Also “mountains overhead” and “crowd of stars” stand for things that she knows exist but cannot be reached.

This poem was published in W B Yeat’s second collection of poetry in 1893 it is actually based upon a 16th century French sonnet. The lady being addressed was the Irish actress Maud Gonne with whom he had a relationship.

You may find further symbolism within.

I'm listening to Michael Nesmith's version of his own song Different Drum. It's still the best one despite many covers including Linda Ronstadt with the Stone Poneys and PP Arnold. Have a listen here.
Posted by bazza at Tuesday, December 10, 2019 10 comments: