I've been a bit busy lately so I'm re-posting this from five years ago. It's one of my favourite places in London.

The passing away of Sir Roger Bannister last month has recalled a time when post-war Britain was very different than it is today. The breaking of the four-minute mile barrier was as much psychological as it was physical. The whole event, which took place at the Iffley Road track in Oxford where Sir Roger was a student doctor, was very low-key in a way that would seem amateurish today. Sir Roger had specifically targeted breaking the four-minute barrier. Seven athletes were scheduled to race but one of the runners forgot his shorts so could not take part in the race! 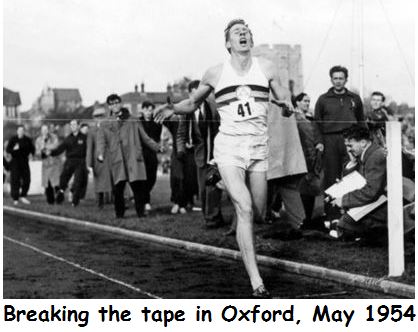 The concept of breaking that barrier was challenged by some who said no human could do it. However, Roger Bannister thought "why not, why would the barrier be at exactly four minutes?"
He ran a mile in three minutes and 59.4 seconds and, as if to prove his point, the record was quickly broken again by Australia's John Landy and then many times over the next few months. It seems that once the psychological barrier was broken, it became relatively easier. He had been assisted in his efforts by his two pacemakers, Christopher Chataway and Chris Brasher who both became very successful middle-distance runners themselves.
I love this charming quote from Sir Roger on his retirement: "I'd rather be remembered for my work in neurology than my running. If you offered me the chance to make a great breakthrough in the study of the automatic nerve system, I'd take that over the four minute mile right away. I worked in medicine for sixty years. I ran for about eight."[ 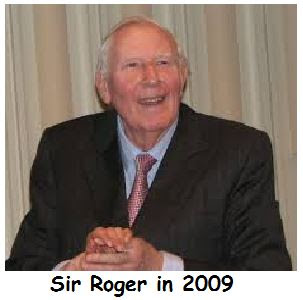 Peter Blake, born 1932, is a British artist who was a leading figure in the Pop Art movement in the 1960's. He is most well-known for co-creating the sleeve design for The Beatles album Sgt Peppers Lonely Hearts Club Band in 1967 and this post is really about that. 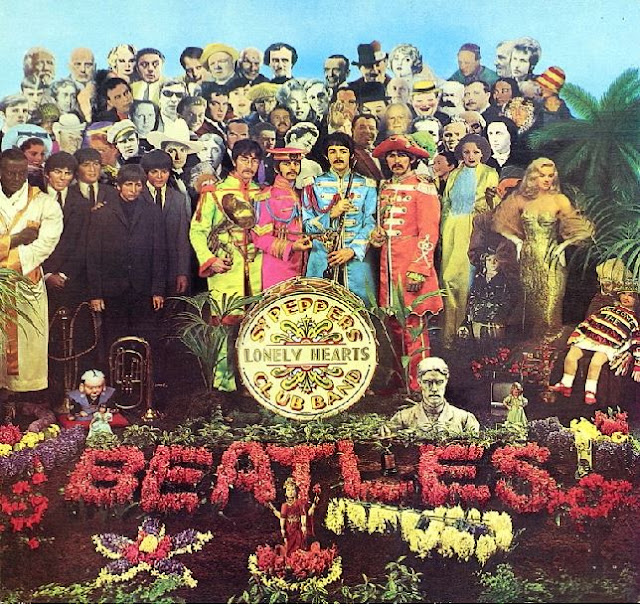 Blake's iconic sleeve design for Sgt Pepper
Probably the most well-known album design ever made. 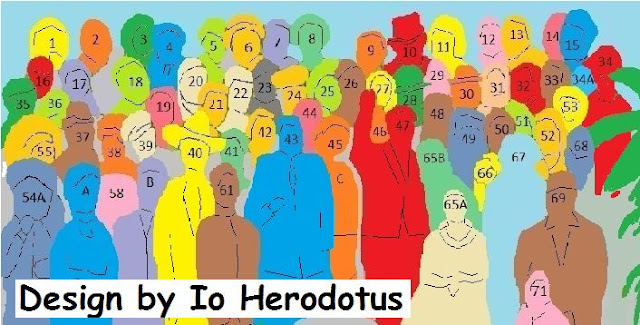 Io Herodotus's explanation of the people featured on the sleeve.
Here is a list of those people followed by a list of some who were left out. You may notice that there is not a perfect correspondence between the two pictures because changes were constantly being made:
Top row
(1) Sri Yukteswar Giri (Hindu guru)
(2) Aleister Crowley (occultist)
(3) Mae West (actress)
(4) Lenny Bruce (comedian)
(5) Karlheinz Stockhausen (composer)
(6) W. C. Fields (comedian/actor)
(7) Carl Jung (psychiatrist)
(8) Edgar Allan Poe (writer)
(9) Fred Astaire (actor/dancer)
(10) Richard Merkin (artist)
(11) The Vargas Girl (by artist Alberto Vargas)
(12) Leo Gorcey (image was removed from cover, but the space remains between "The Vargas Girl" and "Huntz Hall")
(13) Huntz Hall (actor)
(14) Simon Rodia (designer and builder of the Watts Towers)
(15) Bob Dylan (singer/songwriter)

People excluded from the cover
(12) Leo Gorcey – was modelled and originally included to the left of Huntz Hall, but was subsequently removed when a fee of $400 was requested for the use of the actor's likeness.[5][6]
(54A) Unidentified laughing figure - barely visible
(56A) Sophia Loren (actress) - behind the Beatles waxworks
(57A) Marcelo Mastroianni (actor) - behind the Beatles waxworks
(65A) Timothy Carey (actor) - was modelled and originally included but largely obscured by George Harrison in the final picture
(68) Mahatma Gandhi – was modelled and originally included to the right of Lewis Carroll, but was subsequently removed According to McCartney, "Gandhi also had to go because the head of EMI, Sir Joe Lockwood, said that in India they wouldn't allow the record to be printed".
Jesus Christ – was requested by Lennon, but not modelled because the LP would be released just over a year after Lennon’s Jesus remark.


(C) Adolf Hitler – was modelled and was visible in early photographs of the montage, positioned to the right of Larry Bell, but was eventually removed when his inclusion was considered offensive.
Posted by bazza at Monday, April 02, 2018 17 comments: