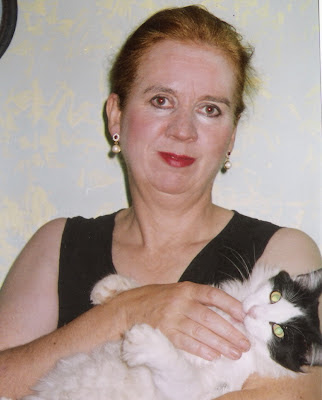 Fiona Pitt-Kethley is an idiosyncratic poet whose work I have always enjoyed. I don't really need to comment further on this one.....

Song of the Nymphomaniac
Fiona Pitt-Kethley

.....OK so I decided to comment further.You may have been chuckling as the list grew longer but I bet you were stunned by the last line!
Posted by bazza at Friday, August 24, 2012 10 comments:

How Beer Saved The World

I'm here to defend the good name of beer and to tell you how it saved the world. Really.
Many scientists and anthropologists now believe that it was not the desire for bread that kick-started the agricultural revolution that ended hunter-gathering 9,000 years ago; it was the yearning for barley to make beer. This led to inventions such as the plough, the wheel, irrigation, mathematics and even led to writing! This cascade of world-changing innovations was brought about by the desire for beer.
In ancient Eygypt workers were paid in beer so we could say that we wouldn't have had the Pyramids without beer. There are those who claim it is one of the major food groups because of it's nutritional content.
In modern times it played an important role in refrigeration, the discovery of germ theory and modern medicine.
However, in Medieval times when water was too dirty to drink, possibly it's most important function was to support the population. Beer was safe to drink and men, women and children drank it morning to night, certainly in England.
That possibly is still the case in some parts! Cheers.

This is the final property in the orange set in my blog-tour of the London Monopoly board.
I have to admit that Vine Street is the single property on the London Monopoly board that I don't know. Having researched it, I have to wonder why it was chosen as it is not very high-profile. Apparently it consists mainly of the backs of properties that are on more salubrious streets. There is a popular pub-crawl around the board's sites but there are no licensed premises on the street (but plenty nearby).
But, you know, something interesting can be found almost anywhere if you look properly!
The property in the picture above is at 1 Vine Street but known, for some reason, as One Vine Street. It's a recently completed commercial site with a hand-made brick façade but the corner entrance has been retained from a former pub on this site.
The mural in the picture above was painted by Allison Turnbull. The design is based on her interest in taxonomy and morphology and is based on the relationship between various grape varieties. Who'd have thought that? (Vine Street, grapes, geddit?)

Alan Tyers is a British painter, born 1944, who worked in the advertising industry. He paints in gouache (say 'goo-ash'), which is an opaque water-colour. His paintings have the look of early London Transport posters, which is no bad thing in my opinion, see here. He paints using large blocks of flat colour but manages to convey a real sense of place. I also admire the draughtsmanship in the above painting and the interesting use of colour. Here are some more of his works: