All of these facts must be true because I got them from the Internet - except for the one that I made up! Can you spot my one?

Answer is now in the comments section!

I'm listening to Candy Says by The Velvet Underground with the late Lou Reed on vocals. Listen HERE. It's a very sad song about Candy Darling who was the person he sung about in Walk on The Wild Side.
Posted by bazza at Tuesday, June 26, 2018 10 comments:


Reposted from February 2013.
This post is especially for All Consuming. But of course anyone is very welcome to comment!
Flowers


Some men never think of it.
You did. You’d come along
And say you’d nearly brought me flowers
But something had gone wrong.

The shop was closed. Or you had doubts —
The sort that minds like ours
Dream up incessantly. You thought
I might not want your flowers.

It made me smile and hug you then.
Now I can only smile.
But, look, the flowers you nearly brought
Have lasted all this while.
From Serious Concerns, Faber & Faber, 1992

Wendy Cope, born 1945, is an English poet, the kind of whom it is easy to dismiss as lightweight or superficial but I would like to make the case that she is neither of those things. Although clothed in humour and wit, her words carry the weight and gravitas and of more serious matters. She cleverly uses the easy appeal to make a point, often about men: Men are like bloody buses-/ You wait for about a year/ And as soon as one approaches your stop/ Two or three others appear.
The poem centres around the themes of remembrance and intentions that were never carried out and there is a deep underlying sadness present. I think it is saying that the thought counts as much, or more, than the deed. The last stanza is heart-breakingly poignant.

I am listening to the late Kevin Coyne's brilliant recording of Blame it on The Night. He was a bit of a wild child who had been a psychiatric nurse and he sang about mental illness with deep insight. Listen here.
Posted by bazza at Monday, June 11, 2018 9 comments:

The solution to the Old English Riddle of my last post is, of course 'A Bookworm'. Hels's analogy with dementia also perfectly fits the description as does Arleen's ageing poet; so everyone was right! 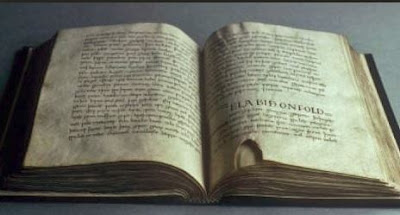 The Book of Exeter is the oldest extant collection of Old English literature. The copy in Exeter Cathedral was made after the year 975; so it's well over a thousand years old. Some of the poems it contains have been dated back to the seventh century. It was presented to the the Cathedral by Bishop Leofric who died in 1072.
It contains religious verse's and many riddles, some of which are full of cheeky double entendres that would make you blush so it's a strange mix of the spiritual and the secular side-by-side!
Here's one more:
I am a wondrous creature for women in expectation, a service for neighbours. I harm none of the citizens except my slayer alone. My stem is erect, I stand up in bed, hairy somewhere down below. A very comely peasant's daughter, dares sometimes, proud maiden, that she grips at me, attacks me in my redness, plunders my head, confines me in a stronghold, feels my encounter directly, woman with braided hair. Wet be that eye.

Scroll down for the answer!