Here are the answers to my literature quiz:
The kudos goes to David but others did well too! He was the only one who spotted that the answer to Q2 could be found in the header of this blog.
Q1. Which famous words follow these "...any man's death diminishes me, because I am involved in mankind, and therefore...."?
A1. "....never send to know for whom the bells tolls; it tolls for thee."  This is often misquoted as "...ask not for whom the bell tolls...". It's the closing line of Meditation 17 by John Donne commonly known as 'No Man is an Island'. Donne was contemplating his own demise.

Q2. Which 1967 novel that tells the multi-generational story of the Buendía family?
A2. One Hundred years of Solitude by Gabriel Garcia Marquez. See the quote at the start of this Blog!

Q3. For which scientist did Broca's Brain win a Pulitzer Prize in 1978?
A3. Carl Sagan, the populariser of science who made the great TV series Cosmos: A personal Voyage. Broca's Brian was a collection of essays, the title being from an essay about the Frenchman Paul Broca who was the first person to assign different functions to various parts of the human brain.

Q4. What do the titles of John Updike's In the Beauty of the Lillies and John Steinbeck's The Grapes of Wrath have in common?
A4. They are both taken from abolitionist Battle Hymn of the Republic ("Mine eyes have seen the coming of the glory of the Lord....." etc). Julia Ward Howe added new lyrics to the tune John Brown's Body. All Americans should get that one.

Q5. Who, after asking “why is a raven like a writing-desk?”, admitted that he "hadn't the slightest idea" when the person he asked gave up?
A5. The Mad Hatter in Lewis Carrol's Alice's Adventures in Wonderland.

Q6. What book is the first in the series A Song of Ice and Fire?
A6. A Game of Thrones by George R.R.Martin, now one of the most successful TV series of all time. I've never seen it but I'm sure it's very nice....A Song of Ice and Fire is also redolent of the quote at the head of this Blog, which contrasts ice and fire.

Q7. What was the name of Holden Caulfield's younger sister in Catcher in the Rye?
A7. Phoebe, who Holden loves dearly and who represents the innocence and youth that Holden is trying to preserve. Jim (Parnassus) and Sherry got that one.

Q8. Which author's breakthrough book was described by Salman Rushdie as a 'book so bad it makes bad books look good'? And I agree with him!
A8. Dan Brown, author of the execrable The Da Vinci Code.
I'm listening to Michael Nesmith and the First National Band singing Joanne.
Listen HERE.
Funnily enough, I also like a song of the same title by Lady Gaga.
You can listen to it HERE.
Posted by bazza at Friday, August 25, 2017 10 comments: 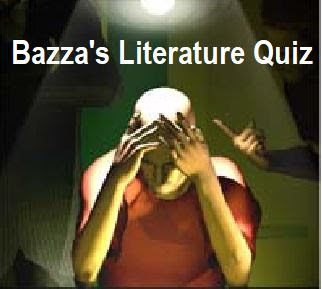 I haven't posted a quiz for a while so here is a new literature quiz. You could easily Google the answers but you wouldn't do that would you? No prizes, just kudos!
Q1. Which famous words follow these "...any man's death diminishes me, because I am involved in mankind, and therefore...."?

Q2. Which 1967 novel that tells the multi-generational story of the Buendía family?

Q3. For which scientist and broadcaster did Broca's Brain win a Pulitzer Prize in 1978?

Q4. What do the titles of John Updike's In the Beauty of the Lilies and John Steinbeck's The Grapes of Wrath have in common?

Q5. Who, after asking “why is a raven like a writing-desk?”, admitted that he "hadn't the slightest idea" when the person he asked gave up?

Q6. What book is the first in the series A Song of Ice and Fire?

Q7. What was the name of Holden Caulfield's younger sister in Catcher in the Rye?

Q8. Which author's breakthrough book was described by Salman Rushdie as a "book so bad it makes bad books look good"? And I agree with him!
Nobody said it would be easy but please have a go
even if only to make me laugh!
Answers will be posted in one week - probably.
Posted by bazza at Friday, August 18, 2017 10 comments:

This is also a series that I have ignored for a while. I started it eleven years ago....
The name of Rosalind Elsie Franklin (1920 - 1958) should be as well-known to us as those of James Watson and Frances Crick who were awarded a Nobel Prize for their discovery of the structure of DNA but it is not. She died at the tragically young age of 37 of ovarian cancer. That, however, is not the only tragedy in this story.
Her inspirational work as a x-ray crystallographer had set Crick and Watson on the road to discovering the double-helix structure of DNA in 1953. They based their research on her earlier findings. They were awarded the Nobel Prize along with Maurice Wilkins in 1962 but the prize is never given posthumously so Rosalind was never properly recognised. It is a matter of conjecture whether she would have shared the award anyway; she was shamefully treated by her male colleagues at the time which was the norm in the 1950s. She was not a feminist and was not known to have complained about her lot. Maybe if she had been born after the war things may have been different.
Franklin was born to a prominent Jewish family in Notting Hill, London in 1920 and excelled as a student, later studying at Cambridge University.
X-ray crystallography is the branch of science that is able to show the shape of objects at the atomic and molecular level. It was a famous photograph known as 'Photo 51', taken under her direction, that led to the the double helix discovery.
She is buried at Willesden Jewish cemetery in north London. (Where, incidentally the prayer hall has just been given Grade II listed status by English Heritage.) This is the inscription on her tombstone:

PS: I have just realised something that must have drawn me to Rosalind Franklin: she was born and died in the same years as my own mother who died of thyroid cancer which was untreatable in 1958 - and she looked like Rosalind!
I'm listening (appropriately for this post!) to the beautiful and very moving Chorus of the Hebrew Slaves from Verdi's opera Nabucco.
Click HERE to listen. The whole cast appear to be visibly moved by the event.
Posted by bazza at Sunday, August 13, 2017 8 comments:

Fitzrovia is an informal area in central London, north of Oxford Street and consisting of less a square kilometre of prime property and possessing a rich history. The area is named after the Fitzroy Tavern, a pub situated on the corner of Charlotte Street and Windmill Street within the district. The name was adopted during the inter-war years, initially by and later in recognition of, the artistic and bohemian community habitually found at the public house. Inside there are photos of Dylan Thomas, Augustus John, Jacob Epstein and George Orwell among others, seen drinking there. The name Fitzroy comes from Old French meaning "son of the King", generally being the name given to a King's illegitimate offspring.
Many famous residents have lived in the Square including Virginia Wolff and George Bernard Shaw (same house - different times; what a couple that would have been!)
The King and Queen pub in Foley Street (where Charles Dickens once lived) is where, in 1962, Time Out magazine said one of the most important gigs of all time was played. That was where Bob Dylan played outside of the USA for the first-ever time.
Charlotte Street is famous for restaurants and the Scala cinema and theatre, since demolished, is where the concert and some exterior scenes of The Beatles 'A Hard Days Night' were filmed.
Many media companies are based in the area now and the most famous of these, since relocated, was Saatchi and Saatchi. They grew to be the world's largest advertising agency while they were based there.  Famous Fitzrovia residents have included Robert Louis Stevenson, James McNeill Whistler, Roger Fry, Guy Ritchie and the novelist Ian McEwen. Madonna has lived there and Lady Gaga bought a place with a roof garden five years ago.