Leonardo da Vinci is rightly considered to have posessed one of the finest polymath minds ever known. Still today his shadow is cast over later men and women of genius who may not get the recognition they deserve..
Most people have heard of Buckminster Fuller bur the majority are not quite sure why his name is known. I hope to redress that situation here, if only to a dozen or so readers!
He was not only renowned architect, inventor, engineer, mathematician, poet and cosmologist but had other idealistic qualities.
At the age of 32 he was bankrupt, depressed and contemplating suicide after the tragic death of his four year-old daughter Alexandria. Thankfully he had a vision of some kind and decided to dedicate the rest of his life to helping humanity. He was one of the first people to postulate the notion that, with political will, world poverty could be eliminated within one generation.
Later generations of scientists have confirmed that his theories stands up. Sadly, the 'political will' has been absent. He was never a mainstream figure and is seen by some as a visionary and by others as a dreamer. His inventions were meant to help achieve his goals of improving human housing and everyday objects.
His is mostly remembered for his invention of the Geodesic Dome which is built out of a series of triangles and requires no internal support. The domes could be packed flat and easily transported and assembled. 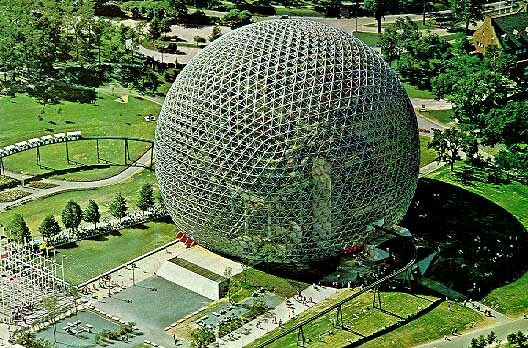 Knowing that you all have short attention-spans, I don't like to post articles that are too long so here are some brief facts about 'Bucky':
He held more than 2,000 patents.

He coined the term 'Spaceship Earth'.

He was a teacher, poet, philosopher, archtect, mathematician, engineer, inventor and product  designer.

He dedicated his life to the betterment of mankind.

The molecule Buckminsterfullerene, not surprisingly, was named after him.

C60 or Buckminsterfullerene is a molecule of 60 carbons atoms.
If you compare the structure of the molecule with the photo of a Geodesic dome you can see why it was so named.
Posted by bazza at Monday, May 10, 2010

Hi bazza,
I'm a big admirer of Buckminster Fuller. I saw the geodesic dome at Expo 67, Montreal, which was the U.S. pavilion.
Buckminster Fuller and Shoji Sadao were, of course, the architects on that venture.
Mr Fuller also attended Habitat 76 in Vancouver. That was the UN conference on human settlement.
Thanks for the fascinating insight regarding this forward thinking man.
With respect, Gary.

Gary: I know it doesn't make sense but I wondered if anyone would know of him. So, once again, I am pleasantly surprised by your comment.
Thanks for the extra insight into this 'forward thinking man'.

Hey Bazza couldn't you write about some lesser mortals please?
:)

Bob: Perhaps I should have called this series 'quite interesting people'. Sometimes I do think 'Heroes' is a bit strong!

His greatest invention was perforated toilet tissue....or am I thinking of someone else?

Very informative post. I must admit I have heard his name but didn't really know who he was. He does sound like quite the creative visionary. To me, he achieved more in his lifetime than 95% of anyone who has ever lived on this rock called Earth. I like the dome structure. It reminds me of that dome they have in DisneyWorld. It's famous... at least here in the U.S. Hell, maybe that's where they got the idea.

Take care, Bazza. By the way, I'm putting you on my blogroll. I like your blog and the way you think. Plus it's easier for me to keep up on your latest posts.

Sir Tom: Er... someone else. Not really a major benefit to humanity is it?

Kelly: Thanks Kelly. I get news of your new posts as I am a follower of your blog and I check in the Dashboard when I log on.