﻿ ﻿Patrick Moore is a truly remarkable man for several very different reasons. He is a real British eccentric, who always wears a monocle and is about the size of a dirigible these days. At eighty-eight years old he is the presenter of the world's longest running TV show (with the same presenter). 'The Sky at Night' is an astronomy programme that has been broadcast once a month since 1957. He only ever missed one episode due to a near-fatal food poisoning incident involving a goose egg!
He thinks he is the only man to have met the first man to fly (Orville Wright), the first man in space (Yuri Gagarin) and the first man on the moon (Neil Armstrong). Before the war he played piano with Albert Einstein in New York. He is also a very skilled composer and plays jazz on the xylophone.
He lives alone on Selsey Bill on England's south coast which is probably the most cloud free spot in Britain. He has a garden full of telescopes, some of which he built himself.
'The Sky at Night' recently celebrated it's 700th edition and in this clip  you can see him surrounded by professors and doctors of astronomy who look like nervous schoolboys next to him.
During the war his fiance, a nurse, was killed when a bomb struck the ambulance she was in. He later remarked that he never married because "there was no one else for me...second best is no good for me..." 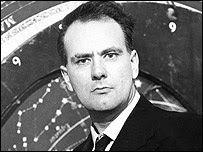 I once heard a producer of his show saying he was the most amazing broadcaster because he spoke on cue without notes or hesitation for exactly the number of minutes required. This clip from 1960, over fifty years ago, shows him in action. You can't see the pupeteer who seems to be working his eyebrows! He has written over 70 books (all on a 1908 typewriter) but, remarkably, is a self-taught amateur astronomer, however, in 1969 he was invited to NASA for the moon landings. They said they could not have gone to the moon without Sir Patrick's highly detailed maps.
When he passes away every broadcaster on this planet will move up one place.
Posted by bazza at Thursday, April 14, 2011

That's really sad about his fiancee - I never knew that.

He really is a remarkable man. I stood right next to him when I lived in London in the 1980s. There was a partial eclipse and he was doing an event in one of the parks, where they had a big screen set up so people could watch the eclipse without being blinded. He was just the same in person as on TV - a larger than life kind of character.

Joanne, I think you have summed him up well - he is always exactly the same person and it's incredible that he still presents the programme albeit with some younger help.

The very lovely Sir Tom Eagerly says:
Oh my goodness he could be my doppleganger - except that he is better preserved!

Sir Tom: I always pictured you as a slightly more decrepit version of Sir Patrick. It seems that you agree. How awful!

Patrick Moore is a very interesting man. A self-taught amateur astronomer and show host that has a remarkable grasp of the goings on in the universe. I watched those clips you linked to and was fascinated by the discussion on where the Big Bang originated and how the universe is expanding. Intriguing explanations were given during the round table discussions. I liked how his eyebrows went up and down in that old clip. Funny. You have to respect a man like this, though. He's incredibly knowledgeable and would give some "professional" astronomers a very real run for their money, so to speak. Just think of the worlds he has opened for people with his show and his thoughts. I'm glad you brought this man to your readers' attentions. Any credit he is given, is deserved.

Don't do that to me. Where shall I find the time to read and watch some more. Very interesting. I will not reserve a seat for the trip to Uranus - to cold for my liking.

Kelly: The thing is that I watched this programme as a little boy and all of the senior astronomers in the UK (and Brian May) credit Sir Patrick for getting them interested in the subject as I do.
He is a much-loved character in the UK and known to scientists around the world. And funny!

Elena: Sorry to have taken up so much of your time. I'm glad you enjoyed it!

Hi bazza,
Another interesting post about a truly fascinating man! I have seen him play the xylophone many a time on telly, a feat in itself.
J
Follow me at HEDGELAND TALES

Hello bazza,
Totally concur with you on Mr. Moore being a truly remarkable man. I greatly appreciate the abundance of info you have provided about him within this most informative posting.
The man is indeed a living legend and I greatly enjoy watching his fascinating television show.
You may recall, rather fondly the time Patrick had a look at Uranus.

An amazing character for sure. And I never knew Brian May was an astronomer. You learn something new every day!

Hi John. Yes he is a gifted musician and, it seems, a prolific compser but I have never, knowingly, heard any of his compositions.

Gary: Yes, the Uranus question could be embarrassing. I think Sir Patrick may be turning into a gas giant himself!

Botanist: I had known Brian May was an astronomer but only found about his doctorate when reserching this post. (That's why I blog!)

Patrick Moore is a true icon. Your bio of him is completely engaging, and I enjoyed both videos of him. I'm once again struck by how much astronomers knew about our universe, and how much of their knowledge about the fundamentals still holds true today. Thanks for highlighting him Bazza.

Snee: I presumed before publishing this that everyone in the UK would know and respect him and nobody elsewhere would have heard of him. I think this has been the case. I'm happy that it captured your imagination.
Enjoy the weekend!

Dear bazza,
I was fascinated by "outer space" as a youngster, particularly the phenomenon of black holes, so I always watched "The Sky at Night" and loved old Patrick Moore. It's good to know more about him, then. Thanks for this illuminating little bit of information.
Yours with Very Best Wishes,
David.

David: Thank you, I'm glad to have been of service. Have a great weekend David.

don't get me wrong i like the guy and what he's done for science and astronomy. i've met him, and i've also met and chatted to other astronomers, some of whom were also based at a particular observatory where patrick used to work. he was asked to leave there under hushed reasons, and part of his duties there was showing round kids...

ResCogitans: Thanks for your comment. I think it's very dangerous to hint at allegations that may or may not be with foundation. Especially in a public place like this. Two quotations come to mind:
“Whereof one cannot speak, thereof one must be silent.” and...
"Let him who is without sin cast the first stone".
This is not to denigrate your comment but to try to balance it. Thanks for visiting.

i'm embarrassed to say it seems i'm alone in having never heard of Patrick Moore before now... but now that i have there are so many tidbits in here to grab my attention... what an interesting man with so many experiences, and such a full life...

(... a British eccentric, a monocle and a 1908 typewriter alone make me wish i could meet him in person)

Hello Joanne: Oh, I don't think any of my US-based commentators had heard of him so don't be hard on yourself!
But he certainly is an interesting person.

Though I'm not familiar with Sir Patrick Moore, your blog invites those like me to have a closer look. I appreciate your time for research here. I wish I could have watched him, through a child's eyes.

Have a good week, Bazza.

dcrelief: I am taken back to my boyhood every time I see the programme. My wife thinks I have never moved far from it anyway!
Thanks for the greeting and I wish you the same. We are enjoying above-average temperatures in the UK at the moment.

interesting! I enjoyed reading this, never heard of him.

Hi Kathy. I seem to have unwittingly become his disciple!