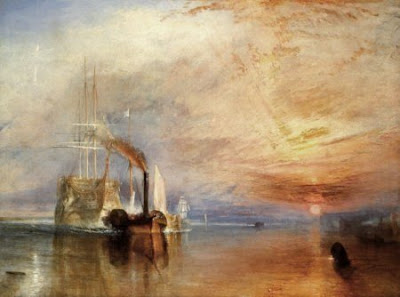 The Fighting Temeraire 1839
Joseph William Mallord Turner painted his masterpiece in 1839. In a BBC poll in 2005 it was voted the Greatest Painting in a British Gallery with more than 25% of the vote.
The picture is full of symbolism. The Temeraire had been a part of Nelson's famous victory at Trafalgar and now it was being ignominiously towed upstream to be broken up at Rotherhithe in east London. The sunset is symbolic of the fading British empire and the power of steam over sale emphasises the might of the Industrial Revolution, which was born in Great Britain and so far had not been exported, as it was to later be, across the world.
The point would not have been lost on contemporary viewers. The painting still hangs in the National Gallery in London as Turner bequeathed all the works he still owned at his death to the nation. He referred to the Temeraire as "my darling".
He was undoubtedly the greatest British painter of all time and can fairly be seen as the prefigurer of impressionism. This was recognised by the early French impressionists. He was also an inspiration to the early abstractionists.
He was born in Covent Garden and devoted the whole of his life to his art and was continuously famous from his teens until his death. He was, unequivically, a genius. 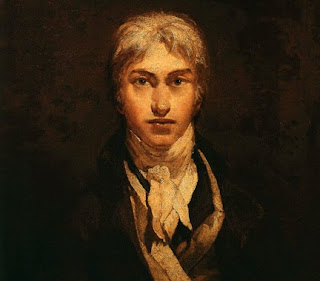 Turner, self-portrait aged about 24
Interestingly a lot of artistic licence has been taken with the painting of this picture. For example at the time this painting was made, 1839, the Temeraire had been used as a prison ship for several years and had a badly damaged hull and no masts.
Also it was towed by two steam tugs and it is shown going in the wrong direction (or the 'sunset' is a sunrise!)
But, you know, I don't think any of this matters; Turner was making great art not writing a history book.
There are many websites showing lots of the prolific output of this eccentric, socially awkward man who remained single for all of his life.
Posted by bazza at Sunday, March 07, 2010

I often walk past the house where he lived for most of his life. It's a terraced house in St. John Street in Central Oxford. (Mensa started in a house next door.)
PD James also used to live in this street.

Bob: William Turner was known as 'William Turner of Oxford' to distinguish him from JMW Turner who was a close contemporary.
JMW lived in various places, cheifly in Harley Street, later in Isleworth.

Alicia: I'm so glad to find a fellow admirer of Turner.
He is buried in St Pauls and I think that's where you saw his statue.

Oh dear, I seem to be correcting everyone today! I hope it's taken in the light-hearted spirit in which it's meant!

Enjoyed this history and story of a great painter. I enjoy the impressionists so I do like this precursor of them as well.

Thank you for visiting my blog. Come again.

Hi bazza,
That is also one of my favourite paintings.
I have had the great privilege of seeing that painting in the National Gallery many years ago.
Thank you for a very informative posting. Much appreciated.
With respect, Gary.

Bernie: Thanks for visiting and I'm happy that you enjoyed the post. Yes I will visit again. (Bernie's blog is a 'Blog of Note'!)

Gary: Now, of course, Turner's will has been executed after more than one hundred years and the Tate Britain has the Turner wing where hundreds of his paintings are permanently housed. This picture seems to have universal appeal.

Turner, undeniably a favorite...
Would not have been my first choice, but... have not seen it up close nor was I aware of the symbolism, not sure it changes how I feel about.
Still, a jewell!!!

I won't make that mistake again!

Alicia MBB: He was an absolute master of light. I'm glad you have the courage of your own opinion; who wants to follow the herd!?
Thanks for stopping by.

Bob: It's not an uncommon mistake -I made it myself years ago. You stick with Bazza mate and I'll put you right!
Anyway your comments always have extra value and I learned something about Oxford.

Hi Bazza, nice meeting you! I enjoyed reading some of your posts on this blog,including the one about English and American vocabulary. Often very confusing to me as a Belgian! Have a great week!

Hi there!
Sorry if my comment is not related to your post.
I just wanted to thank you for visiting my site and for leaving a comment. I've always wanted to read a Waters book but I haven't gotten around to actually buying one since I was able to watch a few of her films and well, the films weren't to my liking and was actually afraid to buy the book for fear that it wouldn't be any different from the films. Now however, I just might purchase her books on my next bookstore trip.

Jientje(Gene-chu!): Thanks for visiting. I'm off to Bruges again in May (we go every year for a few days). I recommend Jientje's blog for interesting photos.

Gwen: To try Sarah Water's work I suggest starting with Fingersmith or Nightwatch. Thanks for stopping by.

this piece you have posted is utterly enchanting...

Joanne: You always can be relied upon to say something heart-warming!
I agree that this painting is enchanting and I am happy that so many people seem to like it. I wasn't quite sure how many people appreciated him world-wide.

The truth be told, I 'd be hard pressed to find something of his that I don't feel is exquisite, monumental... so, it does not matter. :)

Alicia MBB: 'Monumental', yes thats a good word to describe a lot of his output.
I suppose you could define this one as belonging to the History Painting genre.