My Heroes (24) The Everly Brothers

The first music I was ever aware of was by the Everly Brothers. The first record I ever bought was by them and my all time favourite concert was the wonderful evening on September 23rd 1983 at the Royal Albert Hall in London when they re-united after a ten year split. I was also at what they said would be their final concert in the UK in 2005. 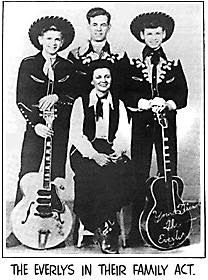 Their unique harmonising began when they became part of the family musical radio shows in Shenandoah
in the late 40s and early 50s. They were still teenagers when they had their enduring first big hit "Bye Bye Love" in 1957.
Their singing style strongly influenced The Beatles, The Beach Boys, Simon & Garfunkel and most of the so-called 'British invasion' groups who overwhelmed US music in the wake of The Beatle's success.
Stevie Nicks says she learned to harmonise with Lindsay Buckingham in Fleetwood Mac by listening to the Everly Brothers.
Their many hits included "All I Have to do is Dream", "Til I Kissed You", "Bird Dog", "Wake Up Little Susie",  "When Will I Be Loved", "Let It Be Me", "Walk Right Back", "Crying in the Rain" and many more but I have to reserve a special mention for a record which sounds as fresh today as it did on it's release fifty years ago in 1960.

Warner Brothers gave Don & Phil the industry's first million-dollar contract and the first single they released was "Cathy's Clown" (it's UK catalogue number was WB01). It sold eight million copies. That song, as many of the other hits, was written by the Everlys. It was also the first single to top the US and UK charts at the same time.
In the later years their popularity remained greater in England than it did in the USA.
Roll back the years and listen to it here.
Posted by bazza at Sunday, March 14, 2010

Hello bazza,
'Wake up little Susie'. I love that song.
A most informative and highly enjoyable read regarding 'The Everly Brothers'. They certainly were quite the influence on the 'British Invasion'.
Thanks for this excellent posting.
Kind wishes and respect, Gary.

Gary: Their very earliest hits, including 'Susie' were written by husband and wife team Felice & Boudleuax Bryant.
On the Oprah Winfrey Show former president George W. Bush named it as his favourite song!

Now I have "Wake Up Little Susie"stuck in my head. Make it stop!!

I have heard it said that the Beatles imported American music back into America. Listening to this track helps to confirm this!

Bob: I would go further and say that British bands of that time re-exported blues music back to the states, which was an indigenous US musical form.
American teenagers were made aware of their wonderful musical heritage via the Beatles and others interpreting the music of so many like Chuck Berry, Muddy Waters, Bill Broonzy and others.
I agree with your view.

I remember the Everly Sisters (How Much is that Doggy in the Window?). No! Wait! That was the Beverly Sisters.