ELEANOR CROSSES were a series of twelve extravagantly decorated stone monuments topped with crosses and erected in a line down part of the east of England. They were built at the instigation of Edward I between 1291 and about 1295 in memory of his beloved late wife Eleanor of Castile. The King and Queen had been married for 36 years and she stayed by the King’s side through his many travels including on a Crusade when he was wounded at Acre. She had died in Harby, a village near Lincoln in 1290. The crosses, erected in her memory, marked the nightly resting-places along the route taken when her body was transported to Westminster Abbey in London.   The crosses stood at Lincoln, Grantham and Stamford, all in Lincolnshire; Geddington and Hardingstone in Northamptonshire; Stony Stratford in Buckinghamshire; Woburn and Dunstable in Bedfordshire; St Albans and Waltham (now known as Waltham Cross) in Hertfordshire; Cheapside in London; and Charing (now Charing Cross) in Westminster.    Three of those medieval monuments – those at Geddington, Hardingstone and Waltham Cross – survive more or less intact; but the other nine, other than a few fragments, are lost. The largest and most ornate of the twelve was the Charing Cross. Several memorials and elaborated reproductions of the crosses have been erected including, the Queen Eleanor Memorial Cross at Charing Cross Station built in 1865. 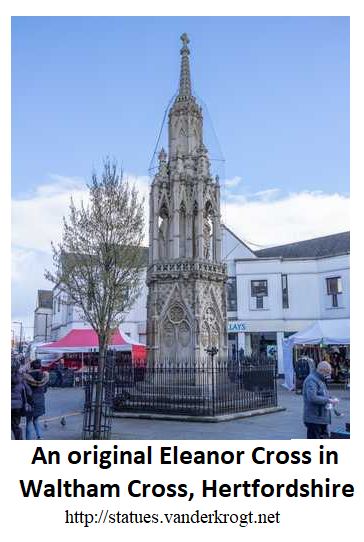 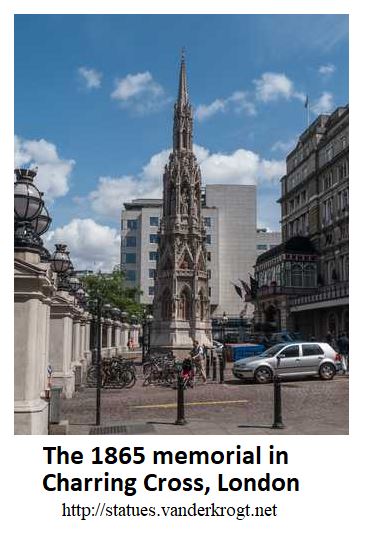 I'm listening to Nina Simone's stunning, soulful version of He Ain't Coming No More.
Listen to it HERE

I can understand why the nominated cities didn't necessarily love Edward I and Eleanore of Castile as much as the royals loved themselves. But the 12 Crosses were beautifully designed and expensively decorated, and well laid out in a straight line along the country.

Surely the crosses could have been rededicated to more loved events or people, rather than being destroyed.

Hi Bazza - it's fascinating to read the history and to know the reason these statues were erected ... an amazing tribute by Edward to his wife of 36 years ... Edward also was an amazing king-administrator - setting many of our standards that we still maintain today ... thanks for this and I love Geddington's triangular statue - cheers Hilary

Hilary: I agree; sometimes the benefits of early monarchs are hidden by all of the bad things we see!

Lovely…one thing I really enjoyed in London…the churches…magnificent. One had a restaurant In The basement…we did not eat there as there were people buried in the floor. Close to the museum if I remember correctly. Nothing like that inAmerica or if there is, I have missed it visiting 46 states and living in several.

Brenda: St Pauls Cathedral has an excellent restaurant in the crypt! Some of our churches are nearly a thousand years old and have had a church on the same spot for even longer than that.
I have visited about fifteen US states and what they lack in history is certainly made up by other things such as scenery and variety.