The Olympic Stadium with 895 days to go!
My office is only a few hundred yards away from the huge building site for the 2012 Olympic & Paralympic Games.

Last Wednesday we were given a guided coach-tour of the spectacular site by Huw Edwards, the Government and Business Relations Manager at the Olympic Delivery Authority.

The project is on, or slightly ahead of, target for completion time.

At this moment the site is an ever-changing maze of driveways, open pits, piles of sand and mud and venue sites under-construction in various stages of completion. Security is high on the agenda and impressive systems are in place and working well and presumably will be a well-oiled and high-functioning element of 2012. 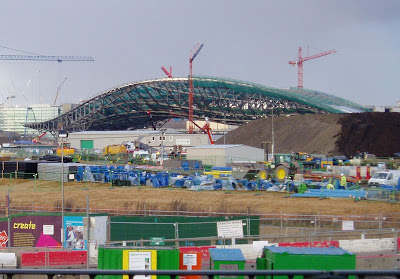 The thing that impressed me the most was the Aquatic Centre roof (above). It was built on scaffolding, then rasied one-and-a-half metres into the air by crane and lowered onto just three concrete towers. It was lowered by a computer-controlled crane, one millimetere at a time, taking a week to complete. Below is an artists impression of the Aquatic Centre after completion.
The beautiful project was designed by Britain's world-renowned Iraqi-born architect Zaha Hadid. Incredibly it is her first major British commission.

I think the reason that London was favoured above Paris as a choice of venue for 2012 was London's imaginative legacy programme. The 4,000 capacity Olympic Athlete's Village will be turned into 'affordable housing' in a deprived area of London. Although larger companies are obviously winning the major building contracts there are regulations in place to make sure some of the sub-contracting and third-tier contracts are given to smaller and local businesses.
There is a free website (https://www.competefor.com) where any business can register and upload their profile and receive a regular list of contracts that they can bid for.

If you are interested in following the progress of this development, probably Europes largest current building project, you can visit:

I'm not looking forward to the Olympics. I follow Premier League football but can't understand what people get out of watching athletics.

There was a radio programme not so long ago: it was suggested that sporting achievements were on a par with artistic achievements....I was astonished!

H'mmmm (as you used to say); I would find it hard to compare the relative merits of athletic and artistic acheivements.
I think sport is about heroics at it's highest level.
I enjoy Premiership Football (soccer in the UK) but think there is too much cheating for it to be truly heroic!

Prof Harrison has warned that the most disruptive solar activity, capable of knocking out communication systems and TV satellites, will peak during 2012 – just as the Olympic flame is lit in London.

Oops! It's a bit late to change the date!
I did hear, in a news item, that solar activity has begun again after a period of inactivity

oh i love the idea of the legacy program... does affordable really mean affordable? ... around where i live it is pretty laughable when they use the word affordable for housing...

Joanne: It's a strange choice of word isn't it? Does it mean that all other housing is unaffordable?
The actual definition is that it is aimed at those earning less than 60% of the median wage and 'key workers', (nurses, teachers, transport workers etc).
The 4,000 units have no kitchens, because the athletes will eat communally, and will be turned into 3,000 units of various sizes.

Oh, the sights you'll see and we are the lucky recipients of the reporting to follow.

See how selfish I am?
You may not stop blogging anytime soon, my friend.

Mimi, as ever, I am honoured and touched by your visit. You always say the nicest things!