This painting depicts the newly-married fashion designer Ossie Clark and his wife the textile designer Celia Birtwell in their flat in Notting Hill, London, with one of the couple's cats on Clark's knee. Actually, Percy was their other cat but Hockney thought that Percy made a better title; read on to find out why! It is a very large canvas so that the figures are nearly life-sized. They are both looking directly outward making the viewer a third person in the triangle. Typically, the cat disdains this and looks out of the window. The room is stark in a 1960s minimalist style.

Among the various sources that Hockney drew on was Jan van Eyck's The Arnolfini Marriage (see below). There is plenty of symbolism in both works. The Arnolfini dog, which represents fidelity, is replaced by the cat, a symbol of the penis, and representing lack of fidelity ('Percy' is a slang term for a penis).

Hockney's portrait, with the bride standing and the groom sitting, reverses the convention of traditional wedding portraiture, such as Mr and Mrs Andrews by Thomas Gainsborough (also shown below). Indeed Hockney shows the Clarks standing apart, a foreshadowing of their 1974 divorce because of his bi-sexual infidelity. And the reversal of roles hints that she is the dominant party.

The lilies next to Celia Birtwell, a symbol of female purity, are also associated with depictions of the Annunciation; at the time of the portrait she was pregnant.

Hockney worked and reworked the portraits many times until he was satisfied, repainting Clark's head perhaps twelve times. He achieves the difficult task of balancing the dark figures against the light flooding in through the window behind them. 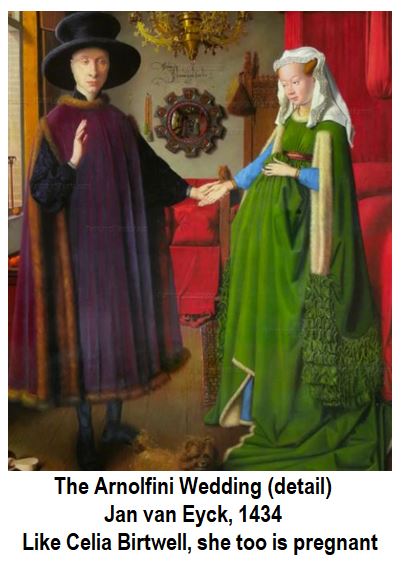 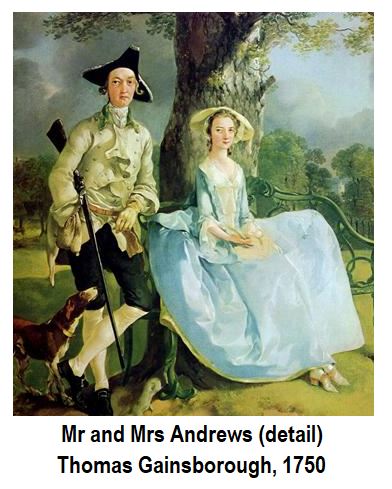 I’m listening to La maison où j'ai grandi by French singer Françoise Hardy. The title means The House Where I Grew Up. In the sixties I was really taken with her. You’d have thought I’d have grown out of it by now! Listen here.
Posted by bazza at Sunday, January 23, 2022

Wonderful pictures and the history on them is wonderful. Have a blessed Sunday- Diana

Thank you Diana. I wish you the same!

I know marriage relationships changed over the centuries, and so did artists' depictions of young married couples. But Hockney has added a strong sense of 1960s uber coolness, detatchment bordering on boredom that other artists wouldn't have detected.

Interesting paintings! Is it just me, or are the dude's feet all out of proportion in the first painting. Like really small. I wonder if that has some sort of symbolism, too. They sure don't look like a happily married couple. More bored than anything. In the last pic, the lady's feet look overly small. Maybe depicting feel like that was the norm at that time.

I hope you and your bride have a lovely year this year. We're all due for a touch of normalcy. Take care.

Hels: Uber coolness is right on many levels; the look on the sitters faces - studied nonchalance and the minimalist approach.

Susan: It's really nice that you're back here! I think the bell-bottom trousers give a false impression of his feet (although I'm not in possession of his actual foot size!)
Maybe, in the Gainsborough picture, small feet were considered more 'feminine' like in China where feet were bound?

Hi Bazza - thanks for this post - I enjoyed it a lot ... I hadn't realised Celia Birtwell was a Hockney muse. I'd love it ... if you'd do a few more posts like this - I'll learn from someone who knows! Cheers and thanks - Hilary

Hilary: You flatter me! I knew the picture well (I did modern art history at the Open University) but I always have to research my posts.