THE HISTORY OF THE CAR RADIO

I have ‘doctored’ this story to make it less technical. Cars haven’t always had radios. One evening, in 1929, two young men named William Lear and Elmer Wavering drove their girlfriends to a lookout point high above the Mississippi River town of Quincy, Illinois, to watch the sunset.  It was a romantic night to be sure, but one of the women observed that it would be even nicer if they could listen to music in the car.

Lear and Wavering liked the idea. Both men had tinkered with radios (Lear was a radio operator in the Navy during World War I) and it wasn't long before they were taking apart a home radio and trying to get it to work in a car.   But it wasn't easy: automobiles have ignition switches, generators, spark plugs, and other electrical equipment that generate noisy interference, making it nearly impossible to listen to the radio with the engine running.

One by one, Lear and Wavering identified and eliminated each source of electrical interference. When they finally got their radio to work, they took it to a radio convention in Chicago. There they met Paul Galvin of the Galvin   Manufacturing Corporation. He made a product called a "battery eliminator", a device that allowed battery-powered radios to run on household AC current. Galvin needed a new product to manufacture. When he met Lear and Wavering at the radio convention, he had found it. He believed that mass-produced, affordable car radios had the potential to become a huge business.

Lear and Wavering set up shop in Galvin's factory and when they perfected their first radio, they installed it in his Studebaker. Then Galvin went to a local banker to apply for a loan. Thinking it might sweeten the deal, he had his men install a radio in the banker's Packard. Good idea, but it didn't work – thirty minutes after the installation, the car caught fire and they didn't get the loan. Galvin didn't give up. He drove his Studebaker nearly 800 miles to Atlantic City to show off the radio at the 1930 Radio Manufacturers Association convention. Unable to afford a booth, he parked his car outside the convention hall and cranked up the radio so that passing conventioneers could hear it.  That idea worked; he got enough orders to put the radio into production.

WHAT'S IN A NAME? That first production model was called the 5T71. Galvin decided he needed to come up with something a little catchier. 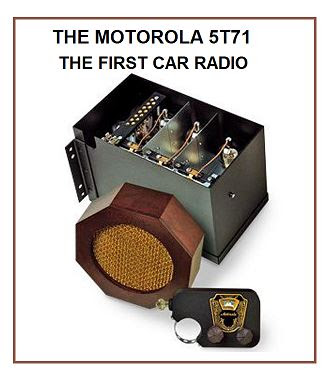 In those days many companies in the phonograph and radio businesses used the suffix "ola" for their names - Radiola, Columbiola, and Victrola were three of the biggest. Galvin decided to do the same thing, and since his radio was intended for use in a motor vehicle, he decided to call it the Motorola.   But even with the name change, the radio still had problems: When Motorola went on sale in 1930, it cost about $110 uninstalled, at a time when you could buy a brand-new car for $650, and the country was sliding into the Great Depression. By that measure, a radio for a new car would cost about $10,000 (£7,200) today.

In 1930, it took two men several days to install a car radio; the dashboard had to be taken apart so that the receiver and a single speaker could be installed and the ceiling had to be cut open to install the aerial. These early radios ran on their own batteries, not on the car battery, so holes had to be cut into the floorboard to accommodate them. The installation manual had eight complete diagrams and 28 pages of instructions. Selling complicated car radios that cost 20 percent of the price of a brand-new car wouldn't have been easy in the best of times, let alone during the Great Depression. Galvin lost money in 1930 and struggled for a couple of years after that. But things picked up in 1933 when Ford began offering Motorola's pre-installed at the factory. In 1934 they got another boost when Galvin struck a deal with B.F.Goodrich tyre company to sell and install them in its chain of USA tyre stores.

By then the price of the radio, with installation included, had dropped to $55. The Motorola car radio was off and running. The name of the company was changed from Galvin Manufacturing to "Motorola" in 1947. In the meantime, Galvin continued to develop new uses for car radios. In 1940 he developed the first Walkiw-Talkie for the U.S. Army.  A lot of the communications technologies that we take for granted today were born in Motorola labs in the years that followed World War II. In 1947 they came out with the first television for under $200. In 1956 the company introduced the world's first pager; in 1969 came the radio and television equipment that was used to broadcast Neil Armstrong's first steps on the Moon. In 1973 it invented the world's first handheld cellular phone.  Motorola became one of the largest cell phone manufacturers in the world. And it all started with the car radio.

WHATEVER HAPPENED TO the two men who installed the first radio in Paul Galvin's car?  Elmer Wavering and William Lear, ended up taking very different paths in life. Wavering stayed with Motorola. In the 1950's he helped change the automobile experience again when he developed the first automotive alternator, replacing inefficient and unreliable generators. The invention led to such luxuries as power windows, power seats, and, eventually, air-conditioning.

Lear also continued inventing. He held more than 150 patents. Remember the eight-track tape player? Lear invented that. But what he's really famous for are his contributions to the field of aviation. He invented radio direction finders for planes, aided in the invention of the autopilot, designed the first fully automatic aircraft landing system, and in 1963 introduced his most famous invention of all, the Lear Jet, the world's first mass-produced, affordable business jet. Not bad for someone who dropped out of school early!

Hello Bazza, Sometimes it seems that all the great inventions have already been invented by people like Lear and Wavering. Perhaps many inventions have gotten more technical in recent years, especially in the field of electronics, but I also wonder why so many appliances have remained the same--fans and heaters with the same three speeds, washers and dryers with at most a new control panel, and so forth. And what about the solutions to all our current problems (no electrical pun intended, but I'll let it stay)? The surface of invention has not been scratched yet.
--Jim

Clever chaps.... I could not have functioned properly, going to work in the early morning without being able to hear the news and commentary in my car. But when Lear and Wavering did all their work back in 1929-30, how many people had their own car? Innovation for its own sake is very worthwhile, but making good profits is even better.

Hi Bazza - what an interesting post ... three intelligent, clever men - who adapt when needed. Each invention means something and improves our lives as society progresses. Cheers Hilary

Jim: I think that some inventions have reached a kind of equilibrium where they are perfect and will never be improved (Having said that, James Dyson is constantly trying to revolutionise everyday items!) I remember when CDs first appeared I thought they would be around forever but they were made obsolete virtually overnight by Internet technology...

Hels: Sometimes, in the world of inventions and innovations, the application comes after the idea itself. Necessity isn't always the mother of invention....

Hilary: Inventors don't always do as well as people with business acumen. Look at Sir Clive Sinclaiir who rose to prominence at the same type as Lord Alan Sugar. Who came out best of those two?

What a great story of how the car radio got invented!

Sherry: And it's all true. We take so much for granted, I think!