Alfred Sisley, 1839-1899, was an Anglo-French impressionist painter who pretty much stuck to impressionist landscape painting for all of his career. His was much over-shadowed by some of his contemporaries, especially Manet and I think, with justifiable reason. Seen together his output is a magnificent collection of his depictions of the countryside in the suburbs of Paris although he also produced some important work in England. He worked 'en plein air' (outdoors) through a longer period than the other impressionists.
I sometimes get the feeling that everything he shows us is 'from a distance' so to speak both emotionally and physically. This doesn't affect the quality clearly evident in his pictures. 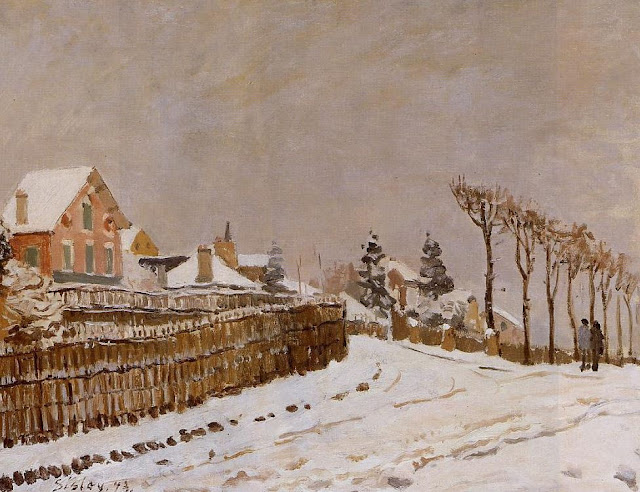 Sisley, Snow at Louveciennes, 1873
People were mostly adornments to his paintings, not the subjects. 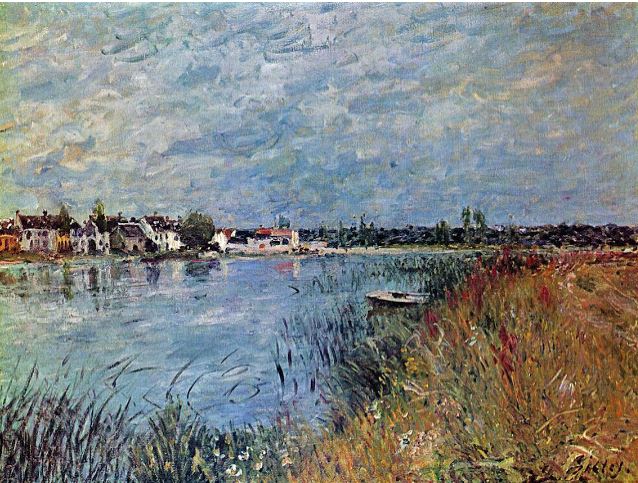 I'm listening to one of my very favourite classical pieces: The Polovstsian Dances from Borodin's Prince Igor. Listen here!
Posted by bazza at Friday, May 04, 2018

Hello Bazza, Many of Sisley's paintings show narrow reflecting rivers with perhaps a few boats and buildings along the shore, one of my favorite types of landscape in real life as well as in paintings. The snow scene you show is their counterpart, and equally appealing.
--Jim

Hi Bazza - I didn't know much about Sisley ... but interesting to read up on him, his art and life ... thanks - cheers Hilary

I like these paintings, but I have never heard about the artist. I love the romance of French Impressionist art. They are lovely.

I have been thinking a lot about Monet's landscapes recently, especially those in the 1870s. Sisley's landscapes from the same era are, I believe, moodier, better coloured and have more atmospheric skies than Monet.

Jim: Despite some of the more negative things I said , I do like his work but I feel that he is on the next rung down form many other impressionists. He was expert at snow and skies, no doubt.

Arleen: Me too, I am criticising Sisley from the perspective of the very best impressionists and there are many such as Renoir and Monet.

Hilary: He is certainly worth investigating!

Hels: I'll agree about the skies and the moodiness but not about the colour! I feel that Monet wins that one - but, of course, it's subjective.....

Lovely paintings. I've got a wonderful book of impressionist paintings, but I'm not sure if any of Sisley's works are in there or not. Surely, they must be, right? I'll have to check. (It's been a looooong time since I perused the paintings in that book...)

Susan: I have a shelf full of expensive art books and exhibition catalogues purchased over thirty plus years. I rarely open them and should probably donate them to my grandchildren's various schools!